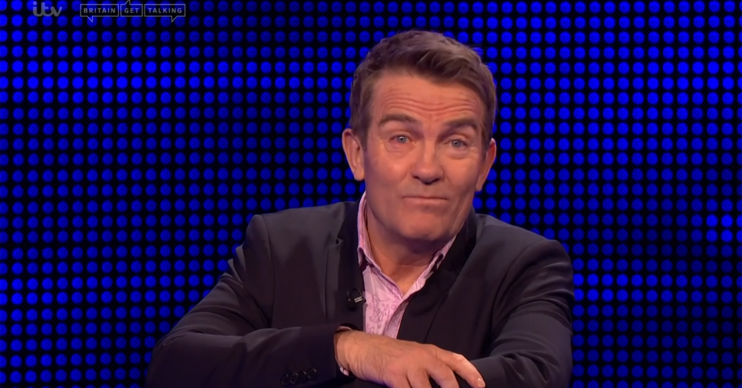 Bradley Walsh was left stunned on The Chase after a contestant’s comments about him.

Carol appeared on Monday evening’s show (April 6), and had a message from her friends for the host.

She explained that her pals at Victoria Bowls Club told her to tell Bradley they “lust after his body”.

What did she say to Bradley Walsh on The Chase?

She said: “They’ve told me to tell you that they think you’re gorgeous.

“And they lust after your body but don’t worry about it because they are all over 65.”

They’ve told me to tell you that they think you’re gorgeous.

Carol asked: “You don’t mind being a toyboy?”

Bradley said: “No. Why have a toyboy when you can have a real one?”

One viewer said on Twitter: “Imagine being told that group of elderly ladies lust after your body. I thought Bradley handled that very well.”

Imagine being told that group of elderly ladies lust after your body. I thought Bradley handled that very well #TheChase pic.twitter.com/9KILkPubPS

Meanwhile, Carol went against Chaser Paul Sinha – aka The Sinnerman – after bagging £5,000 in her cash builder.

The team bagged 19 steps ahead of The Sinnerman, however, it wasn’t enough.

The Sinnerman caught them with 34 seconds remaining.

What did The Sinnerman say?

He told the team: “You have my sympathies because you played really well.

“Sometimes I sit in this chair and my brain is firing off in all sorts of incorrect pathways.

“Sometimes I sit in this chair and everything is just working. This was one of those times.”

The Chase returns to ITV tomorrow, Tuesday, April 7, at 5pm.