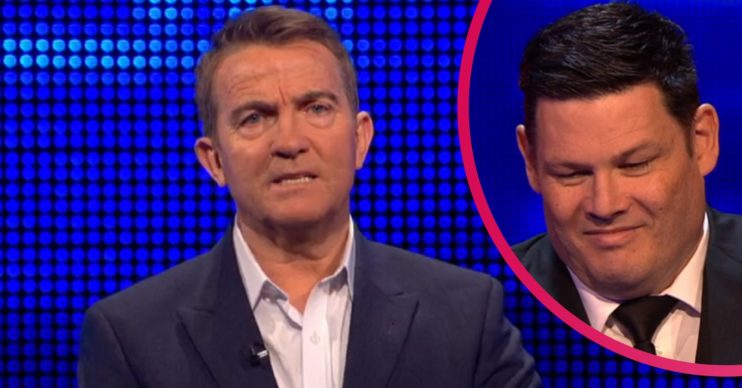 Mark stumbled over a question about US presidents

The Chase host Bradley Walsh called out Mark Labbett’s ‘ignorance’ after the quizzer made a blunder.

During a repeat episode, the presenter took a cheeky swipe at The Beast over a mistake in a head-to-head round.

What happened with Bradley Walsh and Mark Labbett on The Chase?

When contestant Olivia stepped up to play, a question about US presidents left her stumped.

Bradley asked: “Who was the first US president to visit all 50 states while in office?”

The options were either A) Richard Nixon, B) Bill Clinton or C) Barack Obama.

Olivia went with Clinton and Bradders observed: “I’ve got to say, even for back in the day, Nixon, that would have been far too late for a president to visit 50 states. Why hadn’t anyone visited them before, while they were in office?”

Mark told him: “Well for starters, there weren’t 50 states until 1959! So Eisenhower would have been the first president who could have visited all 50.”

Bradley, unimpressed with the Beast spouting his knowledge, replied: “All right! Settle down…”

However Mark didn’t leave it there, as he told Bradley he “just wanted to correct [his] ignorance” – something he claimed to have to do “often”.

I think you’ll find it was Richard Nixon! I hate to correct your ignorance.

Unfortunately for Mark, he awkwardly got the question wrong.

The Beast went with Obama, but the answer was Nixon.

Bradders jumped on the chance to get Mark back. Looking pleased with himself, the host quipped: “I think you’ll find it was Richard Nixon! I hate to correct your ignorance, I have to do it so often…”

In the end, Mark caught Olivia and she went home with nothing.

Mark might have been caught out by Bradley, but he certainly had a lot to be smug about during the show’s recent spin-off series, Chasers Road Trip.

During the programme – in which Mark travelled around with co-stars Shaun Wallace and Anne Hegerty to test their brains against unlikely opponents – the trio had their IQs tested.