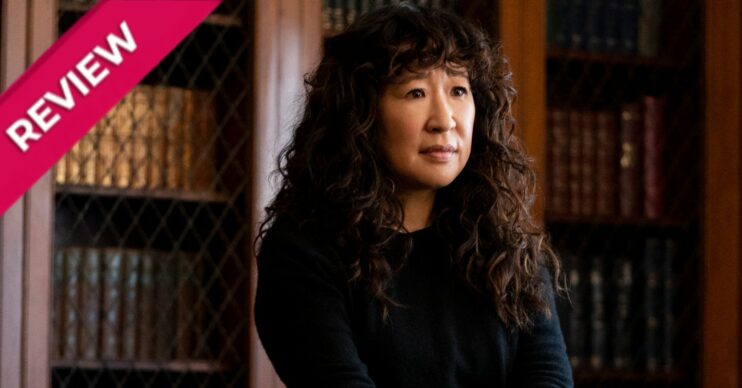 The Chair season 1 review: Is Sandra Oh series a lesson in comedy?

Sandra Oh is heading back to school for this new comedy.

Sandra Oh heads back to university for new Netflix comedy, The Chair.

As the first woman to chair a department at the illustrious Pembroke University, Dr Ji-Yoon Kim is flung into the deep end with inter-staff politics, actual politics, and a whole lot of white men who refuse to catch up with the times.

With just a handful of women around her, and even fewer people of colour, Ji-Yoon finds herself the mouthpiece of a host of cultural issues amid trying to do her job.

All of this is quite the basis for a series, with easy points of reference to discuss topics and troubles as a woman on a mission to succeed.

Cancel culture on the campus? Old men just not getting kids 50 years younger than them, so dismissing them as ‘woke’? Establishing a work/life balance as a mother with a demanding job? The commentary is ripe for the picking, and The Chair does so with a knowing wink and dry sense of humour.

Unfortunately, despite Oh as the billed leading character, she doesn’t really feel like it.

Ironically, it’s her stuck-in-the-mud male counterparts that end up taking over the screen time.

Most prominent in this is Professor Bill Dobson (Jay Duplass), a supposed former fling of Ji-Yoon who spends his days on a self-destruct mission.

A self-aggrandised manbaby, Ji-Yoon acts more like his mother than his ex, running after him to clear up messes he refuses to take responsibility for.

Sure, he has some redeeming qualities, but that doesn’t make him any less a terrible person and after a while it’s kind of boring to watch.

In fact, the amount of time dedicated to Bill does a disservice to the series as a whole.

However, there are some other stronger, female supporting cast members, with Holland Taylor fully understanding the assignment as Professor Joan Hambling.

One of the oldest and wisest women in the faculty, she’s being quietly shoved out of her position. But while she’s learned to deal with a slap on the behind from her misogynistic colleagues, she’s not giving up her job.

Nana Mensah as Professor Yaz McKay is also great. She shows the potential future of teaching which emboldens the students… and threatens the long-standing male staff who ‘don’t get it’.

Is The Chair worth a watch?

The Chair has its moments. But if it was any longer, it may have been enough to turn people off.

Sandra Oh provides a good leading lady, but her side players really provide the meat and potatoes of the story.

It’s just OK, which is a shame considering the cast they have is so strong.