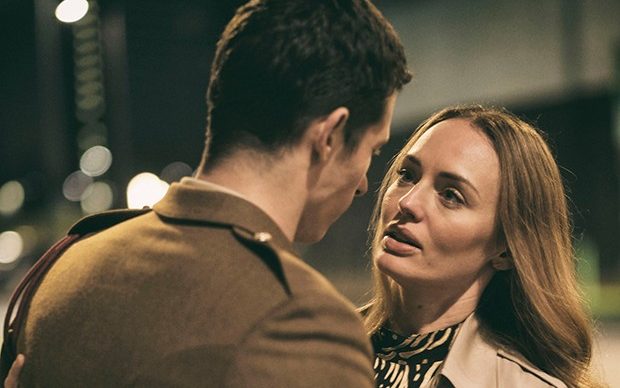 Who is the real victim of the BBC drama?

Episode four of BBC’s The Capture last night, and mercifully viewers were rewarded with a few answers to the head-scratchers that have amassed over the previous few weeks, before being landed with a couple more heavyweight questions.

After finding his lawyer Hannah Robert’s body at the end of episode three, prime suspect Shaun Emery managed to give police the slip, before being bundled into a van.

The soldier was assured he was now with ‘the good guys’, who navigated London’s ‘blind spots’ – areas with no CCTV – to take him to a place of safety.

Meanwhile, fast-track cop DI Rachel Carey found herself suspended after she tried to move Hannah’s corpse for a faster post-mortem, and she was accused of plotting to make evidence public.

This was just a ploy to get her out of the way, as ordered by US agent Frank Napier in a call to DSU Gemma Garland, as he informed her they were even monitoring police HQ on CCTV.

Rachel confronted former boss and lover Commander Danny Hart, explaining that someone was interfering with police CCTV feeds and putting a delay on footage so they could manipulate it “live” by inserting faked images.

As he grimaced, the penny dropped that he had put her in charge of sifting through CCTV footage on a previous terrorism case; footage that had been tampered with, to secure a conviction…

At the end of the episode, we saw Shaun enter a secret room inside a warehouse nightclub, where a group of people were raising a toast to Hannah, reciting the lyrics to hymn To Be A Pilgrim.

Shaun’s solicitor Charlie then appeared and said: “Shaun, I imagine you’d like to know what the [bleep] is going on?”

Yes, yes he would… and so would we all.

This thriller has really got viewers hooked, comparing it to dramas such as Line of Duty and Bodyguard.

And there’s a burning conspiracy theory too. Many viewers are convinced that Hannah isn’t actually dead.

I think The CIA didn’t kill Hannah as they were looking for her. Has the CIA got something against the Brits and wanted Hannah’s evidence? Has MI5 killed her? I agree Shaun is a scapegoat. Terrific series #theCapture

I reckon Hannah isn’t dead and it was a dummy , reason why them private ppl took the body cos they are in on it too!! #TheCapture

I don’t think Hannah is actually dead, hence the morgue thing and the insistence she was sent there. I think they might of given her something to paralyse her body completely, which they also gave the CCTV expert to put him in an induced coma ….. #TheCapture

Theory : Hannah Roberts is not dead !! that body was giving me big Will Byers fake body energy #TheCapture

What do you think is going on? Leave us a comment on our Facebook page @EntertainmentDailyFix and let us know what you think of this story.