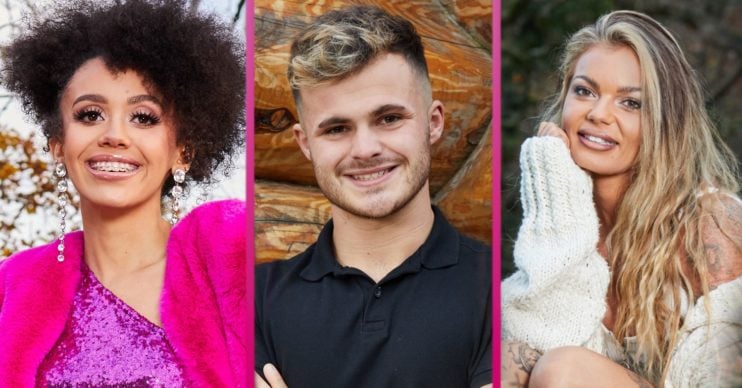 The Cabins and its rowdy contestants are just days away from arriving on our screens.

And this new reality show may be just what we need to kick off 2021.

Dubbed as the ‘Winter Love Island‘ the show aims to bring back old-school dating.

Each contestant will be able to spend 24 hours in  a cabin with another contestant.

After getting to know one another in their cosy, snowy settings, they can then decide when they want to stay coupled up – or move on to the next contestant.

But just who are the contestants of this brand new reality series?

Get to know The Cabins contestants here…

Who are the contestants in The Cabins?

This architecture student says he’s looking for a ‘once in a lifetime’ experience at The Cabins. And he says he hopes to entertain his potential suitors with his dancing and musical skills: “I can play the guitar. I’ve bought it with me.

“I can dance. I say that with a lot of confidence, but yeah… being entertaining and looking like the clown, that’s my region.”

Holly says she is a cabin crew member, make-up artist and a social media influencer. She says her love life is in ‘shambles’ and she’s given up on online dating.

She also says she tends to fall in love rather fast: “Everyone I meet I think they’re amazing and then the red flags start to show. I don’t do enough background research before I get involved with someone. I fall deep really soon and within two days I’m like, ‘I’m going to marry them!'”

Mamudo is a professional footballer and football coach. He says he’s excited to try dating ‘in a natural way’ at The Cabins.

He’s also had some bad luck with app dating, having been catfished in the past. As for hidden talents, he speaks an incredible five languages.

And his dream celebrity crush is: “Maya Jama – she’s so funny and seems genuine and down to earth and obviously she’s not bad to look at as well. Sorry Stormzy.”

Robyn is a sales executive and says she is over being single for the last four years. She’s had her fun on the single scene – and she’s now ready to couple up.

But she’s not one to settle, and really wants a boyfriend that also loves football – with Chelsea being her team. As for online dating she’s also not keen: “It was boring. Swiping through 100 guys at a time… I usually meet guys on a night out.”

The Cabins contestants all looking for love

Jess has worked for Walt Disney World and now works at a local bingo hall. She says her best date ever was at Universal Studios where they went on rides and sang karaoke after.

And her dream man is a male version of herself. She describes herself as: “quite outgoing, adventurous, ambitious.

“My best friends would probably describe me as the life of the party – I’m always the one that gets everyone together for social events.”

Sarah has worked as a murder mystery actress, fitness model and as a waitress. She says she classifies herself as a lesbian, but has dated men in the past.

Her celebrity crushes are Emma Watson and Megan Fox. She’s had such bad luck dating in recent years that she’s almost given up – but hopes The Cabins will reignite her belief in true love.

Sarah said: “I’ve been single for a really long time and kind of got to the point where I feel like there is nobody out there. So I thought, let’s see if TV can help me! It just seems to be fail, after fail, after fail.”

Sofia is a tattoo apprentice and Miss Diamond UK. She describes her love life as ‘absolutely tragic’ but she thinks getting stuck with a stranger in a log cabin for 24 hours could give it the boost it deserves.

But she says she’s worried she might turn off potential matches with her bright and loud personality: “Usually I’m in very, very bright colours and something sparkly.

“So initially when people meet me I think they think,‘Oh my god what have I got myself into?’ If it’s not the clothes that scare guys off, it’s usually the clumsiness and just my weird personality.”

Tom is a business manager who says he’s had several serious relationships in the past. But after none of them ultimately lasted – he hopes to meet the one on The Cabins.

He says his celeb crush is Belle Hassan from Love Island, and he’s never tried online dating. A bit of a unicorn, he met almost all of his past relationships through work rather than an app or website.

Tom said: “If I’m with someone I go above and beyond to make them happy. In my eyes everyone should be treated like a princess.”

Will works for his family run electrical company. He says he’s been a bit of a ‘bad boy’ since breaking up from his girlfriend of five years.

But now he’d like to find the real deal. He says he’s been catfished a few times from apps, and thinks he’ll have better luck on this series.

He also said: “I used to salsa dance when I was younger. If she gets the salsa dance out of me it means we’re getting on.”

Olivia works as a customer service representative and says she’s struggled over the last year to find a decent guy.

She’s hoping to find a romantic guy at The Cabins, and sadly says she’s never had a particularly good first date before.

Olivia said: “I’ve never had an amazing date. This will be the first. Whatever happens this will wow me regardless.”

Joel works as a bin man and he says he’s fed up of dating women from Swansea. He also says he’s never had a long-term girlfriend before – but hopes this will change at The Cabins.

Charlotte is an operations manager for a coffee company and like so many others she’s sick to death of having no luck on dating apps. She hopes The Cabins will provide a fresh chance to get to know others intimately and quickly.

She’s dated guys in the past, but she prefers dating women now. Charlotte explained: “I’ve only been dating women for about 18 months. I feel like I’m still learning my type. I definitely like the more alternative girls. Tattoos, piercings… and more tomboy than really girly.”

When do The Cabins contestants arrive on ITV2?