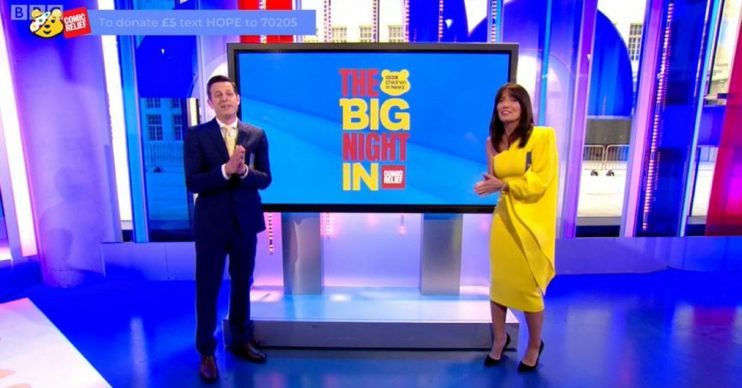 Some thought they were standing far too close

The former host of The One Show and the Long Lost Family star were drafted in to co-present the huge charity show last night (Thursday, April 23) alongside funnyman Lenny Henry.

Read more: EastEnders and Coronation Street did a crossover on The Big Night In virtual pub quiz

For most of their parts on the programme, Matt and Davina stood on either side of a large TV screen that broadcast video links with the various guests.

Some viewers at home thought the pair were not standing the recommended two metres from each other.

Advice on the government’s website reads: “If you go out, stay two metres (six feet) away from other people at all times.”

One Big Night In viewer said: “Catching up on #TheBigNightIn and shouting at Davina and Matt to actually socially distance themselves.”

Another wrote: “Why are Matt and Davina not keeping two meters apart? #bbc #TheBigNightIn.”

No way Matt and Davina are 2m apart.

Someone else said: “Doesn’t look like there’s two metres between Matt Baker and Davina McCall #TheBigNightIn.”

“There’s no way Matt and Davina are 2m apart on #TheBigNightIn,” insisted a fifth.

Shouting at the telly

“I can’t help but think Matt and Davina are closer than 2m on #TheBigNightIn,” another tweeted.

Why are Matt and Davina not keeping 2 meters apart? #bbc #TheBigNightIn

Read more: Prince William admits he was ‘quite concerned’ when Prince Charles had COVID-19

Elsewhere on The Big Night In, Prince William impressed viewers with his comedy skills.

The Duke of Cambridge featured in a comedy sketch that saw actor Stephen Fry take on the role of Lord Melchett, grandson of his famous Blackadder character General Melchett.

Elsewhere in the programme, the royal and his family led the way in clapping for Britain’s NHS and care workers.

A clip showed the prince standing outside his home and applauding with wife Kate and their children George, six, Charlotte, four, and Louis, two.