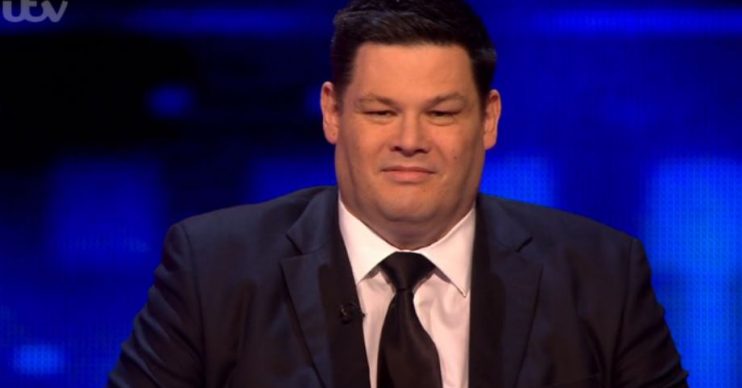 The Beast laps it up as contestant on The Chase gets very flirty!

Bradley didn't appear so sure!

A contestant on ITV’s The Chase appeared to be flirting with Mark Labbett as she told him he’s her “favourite” on the show.

During an episode on Tuesday (15.10.19), 50-year-old hopeful Deborah, an accountant from Leeds, seemed to be trying to get in The Beast’s good books as she told him: “You’re my favourite!”

Read more: The Chase’s Mark Labbett says fans ‘try to pick him up’

Previously in the episode, Deborah revealed to host Bradley Walsh and her fellow contestants that she was a huge fan of wrestling and loved to see WWE events.

Bradley asked who was her favourite wrestler of all time and she said it was late British star Big Daddy.

When Mark, who is married, came into the studio he said: “Given you’re a fan of Big Daddy, I’m not surprised.

“Meet the tribute act,” he said with a grin, adding: “Bigger Daddy!”

Last month, Mark opened up about his wife Katie and revealed the pair are “working” on their relationship, following reports she cheated on him.

During an interview on ITV’s Loose Women, the quizmaster said the couple’s “absolute priority” is their little boy.

Panellist Denise Welch asked him: “So what you’re saying is, your wife and you are working through, and all is good and you’re still together?”

Read more: The Chase’s Paul Sinha plans to ‘call it’ if Parkinson’s affects his general knowledge

The Beast also used the interview to reveal exactly who he thinks is most likely to replace Bradley Walsh as the game show’s host.

Explaining his “mad” theory, Mark said he’s sure the actor and presenter’s son, Barney, will be up to the task.

As the conversation inevitably turned to the hit game show, Christine said: “13 series! That’s a lot of questions, isn’t it?”