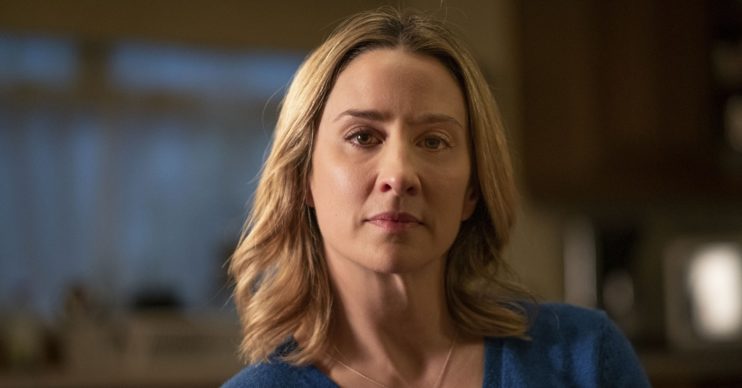 The A Word: Viewers baffled as Alison is ‘missing’ from Ralph and Katie’s wedding

Fans of The A Word were baffled watching the hit BBC drama last night when one of the main characters appeared to be missing from the wedding.

It was a beautiful scene and the happy couple had viewers laughing and crying in equal measure with their stunning vows.

Read more: Who is Ralph’s dad Doug in The A Word and why did he leave Louise?

But there was one detail during the wedding that some eagle-eyed viewers couldn’t help noticing.

Alison, played by Morven Christie, didn’t appear to be there. That’s despite Ralph (Leon Harrop) being the step-son of her father, Maurice (Christopher Eccleston).

Read more: Will there be another series of The A Word and how does season 3 end?

On Twitter, one viewer joked: “Could Alison not be bothered this week? #TheAWord.”

Another tweeted: “Why is Alison not at the wedding?! It’s her dad’s step-son’s wedding. Very strange #TheAWord gorgeous episode though x.”

What, wasn’t Alison there?

Someone else wrote: “We missed Alison… but otherwise, today’s episode was a classic. And the wedding… was fantastic.”

“What, wasn’t Alison there?” a fifth tweeted to The A Word’s Twitter page.

A spokesperson for the BBC told ED! that Morven was missing due to a clash with her 2019 drama The Bay.

They said: “Morven was unavailable during the filming of episode five due to her commitments to The Bay but she will be back for episode six.”

Why is Alison not at the wedding?!? It’s her Dad’s step son’s wedding. Very strange #TheAWord gorgeous episode though x

#TheAWord We missed Alison.
But otherwise today's episode was a classic.
The scenes between Joe and Mark were beautifully played.
And the wedding…. Was fantastic.
No crying here, it must be the hay fever.
Special mention for Ramesh.

What wasn’t Alison there? #theAword

Maurice actor Christopher Eccleston recently discussed the wedding and what it means for the characters.

In a chat with the Bournemouth Echo, he said his psychologist friend worried that The A Word’s Louise – Maurice’s partner and Raph’s mum, played by Pooky Quesnel – “won’t like it” at all.

Read more: Does Lee Ingleby have a wife? Star of The A Word and ITV’s Innocent

Christopher told the newspaper: “I’ve got a friend who’s an educational psychologist, and when I first got the script and I said, ‘Ralph’s going to get married’.

“She went, ‘Oh god, Louise won’t like that – the parents I know, they really, really struggle letting the kids have their independence because their whole life has been defined, and their whole selves have been defined, in this carer role’.”

Are you looking forward to the finale? Leave us a comment on our Facebook page @EntertainmentDailyFix and let us know.

BBC Drama The A Word