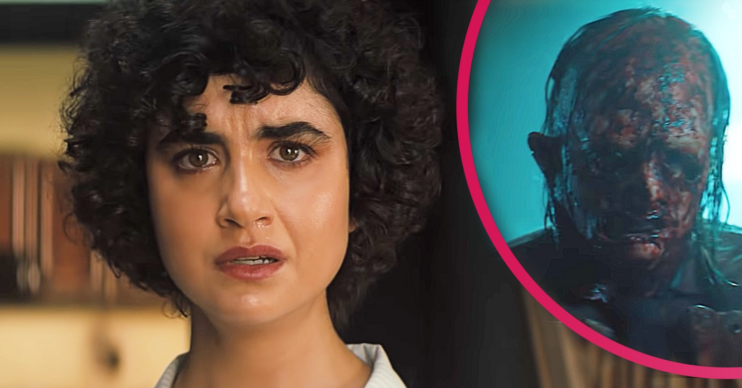 Texas Chainsaw Massacre review: What the critics are saying about Netflix sequel

Texas Chainsaw Massacre on Netflix is a sequel of the classic horror films from the 1970s and 80s – but what are the critics saying about the new TV movie?

The original 1974 version introduced us to a terrifying, power tool-wielding psycho – Leatherface.

What is Texas Chainsaw Massacre on Netflix about?

There have been a number of sequels to the 1974 original, including a 3D version in 2013 and an origin story (called Leatherface). in 2017

However, this Netflix version is an all-new story.

Taking place in the ghost town of Harlow, Texas a group of influencer entrepreneurs decide they want to develop the town into a new, hip destination.

But lurking in the abandoned buildings is Leatherface himself.

And he doesn’t take kindly to visitors.

What do the critics say about Texas Chainsaw Massacre?

Benjamin Lee in The Guardian gave it three stars.

“Rather than expecting us to have endured the three direct sequels,” he said, “the makers of Texas Chainsaw Massacre only ask that our knowledge be as simple as the back-to-basics title.”

He continued: “In a breathlessly brutal 83-minute runtime, there’s little time for thinking.

“Probably for the best, given the thinness of the material and some of the mistakes made within it.

“But first-time director David Blue Garcia finds ample time for suspense, making the most of his unique location and milking just about enough seat-edge frights from the reheated ingredients.

“It’s staggeringly gory, following on from last year’s equally sadistic Halloween Kills, but also sprightly enough for it not to feel too grim (an attention-grabbing final shock is both horrendous and hilarious).”

Not the best, but not the worst

Elsewhere, Ian Sandwell in Digital Spy said: “The movie aims for the same culture clash between city people and the country folk, but it’s all surface level and doesn’t really have anything to say.

“However, it’s undeniably fun to see Leatherface unleashed again and in terms of being an effective and bloody horror ride…

“… there’s a lot to enjoy in Texas Chainsaw Massacre if you’ve got a strong enough stomach.

“It might not hold a candle to the original…

Matt Donato of IGN was even less charitable.

“Texas Chainsaw Massacre fails to redefine Leatherface’s legacy any better than the sequels and remakes it leaves in the rearview,” he said.

“Those who only value slashers based on their body count and murderous creativity might give this pure guts, no glory slasher a pass.

“Texas Chainsaw Massacre stinks like a basement full of corpses…

“… as Leatherface becomes just another hulking villain — not exactly the fresh start franchise diehards might have otherwise welcomed.”

Have you seen it yet? What did you think?