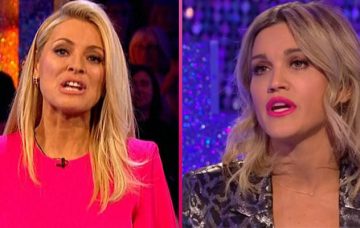 She's faced a lot of criticism

Strictly host Tess Daly has defended Ashley Roberts’ previous dance experience – insisting she trains “as hard, if not harder” than the other contestants.

The presenter has leapt to the former Pussycat Dolls singer’s defence after she came under fire from several of the show’s fans because she has previously danced on stage as a pop star.

Read more: Strictly’s Ashley Roberts ‘fears she will face every dance off now’

But Tess insists Latin and ballroom techniques are “very different” to the girl band’s routines.

During an appearance on Lorraine on Thursday, the 49-year-old said: “She’s got experience in a girl band dancing as a pop star. But ballroom dancing is a very different discipline.

“You never saw the Pussycat Dolls doing a Viennese Waltz, for example. It demands a different set of skills.

“She trains as hard, if not harder than anyone else. She’s in the studio 12 hours a day, they all are.”

When I got asked to do Strictly, I remember my heart feeling like it was going to burst. I was so excited and soooo unbelievably grateful to have been given the opportunity to be a part of such an amazing show. This has been a very turbulent year for me, and so being a part of Strictly has been healing on many levels. I often find it hard to be vulnerable and share my highs and lows, as I’ve always learned how to keep going, chin up and stay on my game. Strictly has given me the opportunity to learn so many new things, to challenge myself constantly, to keep showing up again and again, and to be able to perform again is such a GIFT. And I understand I have to keep proving myself, and upping my game each week. And being in the dance-off twice now is only helping me realise how much I want to be here. it’s been a dream to perform again!!! The other contestants are incredible, and the standard of dancing is so very high!! I’m blessed with another week, so I’ll keep coming back and giving it my all for as long as I get to be here. To all of you have supported Pash and I, I can’t thank you enough!!! It means the most to me/us!!! Here’s to another week. Love you loads, Ash ♥️

Ashley, who avoided awkward questions about her dance experience on spin-off show It Takes Two, took to Instagram to insist the dancing show had been life changing for her.

She revealed: “When I got asked to do Strictly, I remember my heart feeling like it was going to burst.

“This has been a very turbulent year for me, and so being a part of Strictly has been healing on so many levels.

“I often find it hard to be vulnerable and share my highs and lows, as I’ve always learned how to keep going, chin up and stay on my game.”

Meanwhile, Tess says she has been really impressed with the talent on this year’s Strictly, particularly Joe Sugg and Stacey Dooley, who didn’t have any dancing experience, but admits the contestants are facing “a lot of pressure” on Saturday’s semi-final.

She said: “It’s so much fun, I’m loving it. This year has been fantastic. They’ve surprised us with their ability.

“The novices are almost as good as their professional partners now.

“Joe and Stacey have never danced before – they’re in the semi-final. They’re dancing twice on Saturday – they’ve had to learn two dances in a week. It’s a lot of pressure on Saturday.”

Tess is also a huge fan of co-hosting the show alongside Claudia Winkleman, and admits it doesn’t feel like work when she is presenting alongside her pal.

Speaking on Lorraine, she added: “Its’ brilliant fun, we get on so well. It’s not like work when you’re working with your friend. You don’t have to fake any chemistry.

“It’s great to be standing by her side. We just have a giggle.”

Do you think Ashley has an unfair advantage? Leave us a comment on our Facebook page @EntertainmentDailyFix and let us know what you think!