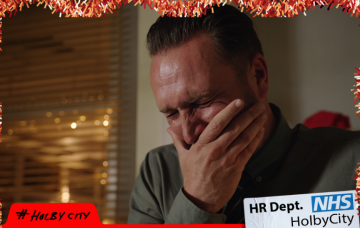 But it turned out to be the best Christmas ever...

Holby City has ended on an emotional note as the Christmas special revealed startling family secrets.

In an episode titled Best Christmas Ever, the central storyline followed the troubles of Adrian Fletcher as he aimed for exactly that, despite his bitter memories from childhood.

Abandoned by his father on Christmas Eve, his mistrust of the absent patriarch is made worse when it is revealed he raised a secret family after his first failed attempt at fatherhood.

On discovering that the unknown other family are in the hospital, Fletch addressed his father saying: “Your whole life is a lie.”

But after being handed a letter by his father Steven which contains a “memory”, it proves to be a Christmas card written to his father when he left him, but which he is shown to have kept for all the years since.

A moving scene shows Fletch weeping with shock and happiness at the unknown love of his father, who only abandoned him because his own father died that fateful festive period years before.

After Fletch offers a first “I love you, Dad” to his father, both agree that they have found the “best Christmas ever” at the end of a tearful episode.

@BBCHolbyCity Fletch is brilliant and he deserves a wonderful Christmas. #HolbyChristmas ❤️

Other characters were seeking love and redemption, with Xavier Duval launching a charm offensive to please the daughter of his girlfriend, Donna Jackson, after making a comically awful first impression by “leering” at her in front of her daughter. 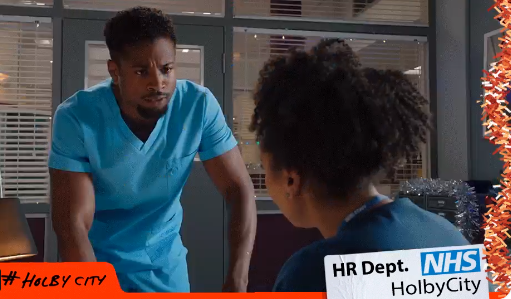 Henrik Hanssen continues to be tortured by guilt, and hits an impasse while performing surgery on a colleague, only to be rescued from the situation by Mo Effanga.

He takes on the role as CEO at the close of the heartwarming Christmas episode, having come to terms with being part of a team he has built at the hospital.

Do you think Fletch should get with Naylor now? Leave us a comment on our Facebook page @EntertainmentDailyFix and let us know!