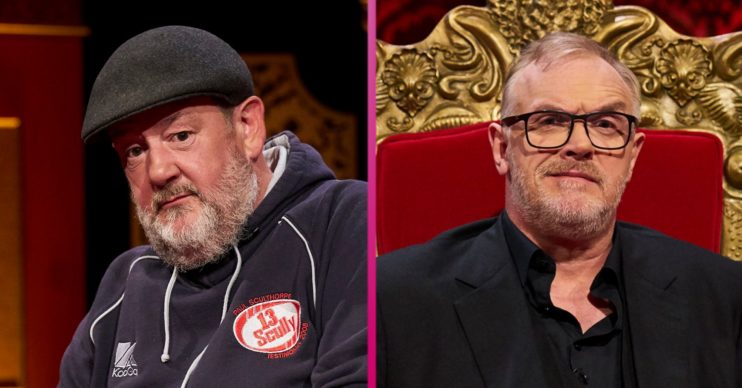 The comedian enjoys the taste of anti-reflux medicine

Taskmaster gets underway tonight and sees funnyman Johnny Vegas draw groans of revulsion from his co-stars with a story about Gaviscon on kebabs.

It’s the show’s inaugural series on Channel 4, following a move over from comedy network Dave.

What does Johnny Vegas say on the new series of Taskmaster?

However, presenter Greg is having none of it.

The episode opens with the Prize Task, which sees each of the comedians bring in a personal possession fitting the description of ‘the nicest thing to put in your mouth’.

Johnny’s item is a bottle of anti-reflux medicine.

He jokes: “It’s like the gun in platoon. That is my reflux, that is my gun. This is the burning, this is my tongue.”

I had a friend, honestly… when he’d get a kebab, he used to put that on.

Greg, confused, says: “It’s not particularly nice to put in your mouth though, is it?”

But Johnny claims: “You know, I kind of like the taste.”

He continues: “I had a friend, honestly, another comic. When he’d get a kebab, he used to put that on. You know when they say, ‘What sauce to put on?’ He’d pour it on the kebab and it would stop him having to get up in the middle of the night.”

But Greg protests: “That’s not true. Someone pouring Gaviscon on a kebab!?”

Johnny insists: “It cuts out the middleman!”

Channel 4 confirmed in November last year that it would be the new home of Taskmaster.

Read more: Autumn at Jimmy’s Farm viewers in bits as Wendy the wallaby is put down

Show creator Alex Horne, who acts as Greg’s on-screen sidekick, said at the time: “We’ve had an amazing nine series on Dave and I’d like to thank UKTV for letting us do such ridiculous things for so long.

“Greg and I are looking forward to getting started on a new series for Channel 4 from next year.

“It seems like the right time to move to a channel with a broader audience and I can reassure people who like the show that it won’t be changing one bit and I’ll still be forced to do things no one should ever have to do.”

Greg quipped: “For the first time in our working relationship I agree with little Alex Horne. The nine series on UKTV have been a joy and I would echo his thanks to all involved.”

Will you be watching Taskmaster on Channel 4? Leave us a comment on our Facebook page @EntertainmentDailyFix and let us know.