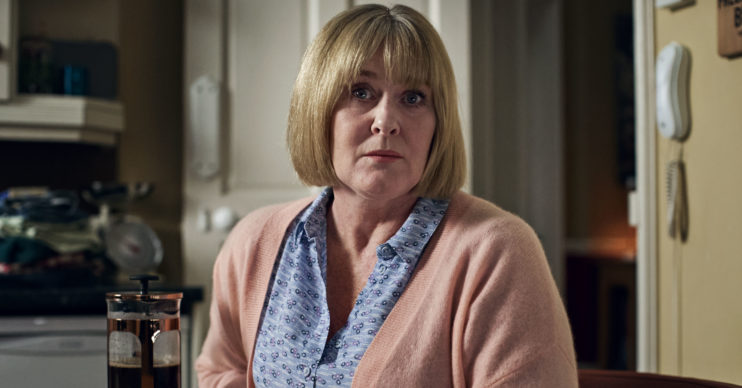 But Sarah Lancashire's powerhouse performance had them all mesmerised

An Ordinary Woman is one of the new scripts Alan has written for the series, all filmed during lockdown on the set of EastEnders.

It stars Sarah (in The Queen Vic!) as Gwen, a mother talking about her 15-year-old son Michael.

Those watching at home were completely mesmerised by her breathtaking performance from the off, but soon they realised it was going somewhere very dark indeed.

It subsequently became clear that she was in love with and lusting after her son.

Viewers at home began to find the whole episode ‘terrifying’ and ‘uncomfortable’.

Is anyone else terrified about where this is going? #TalkingHeads

#TalkingHeads is freaking me out. She’s into her son. Isn’t she. God.

This is getting really dark. #TalkingHeads

I’ve actually had to leave, this is making me INCREDIBLY UNCOMFORTABLE #TalkingHeads

But things were about to get even darker when Gwen eventually confessed to her son how she felt. Naturally, he was horrified.

And viewers were equally as upset.

Tbh I think this episode of #TalkingHeads needs more than a “scenes you may find upsetting” disclaimer, it needs a proper content warning

I’ve literally just tuned into #TalkingHeads and now I’m watching someone having incestuous thoughts about their son? Please don’t tell me Alan Bennett actually wrote this?

Btw anyone who has OCD or intrusive thoughts of a sexual nature, DO NOT WATCH the new #talkingheads with Sarah Lancashire. It’s very well written, but is actually very very upsetting to watch

Certainly some were left questioning whether it was appropriate at all.

Some felt had it been a man lusting after his 15-year-old daughter it consequently wouldn’t have been as well received.

I like Sarah Lancashire but that was absolutely bizarre. No woman would ever write something like that. That was a male fantasy given screen time @BBCOne #TalkingHeads

A quick question about #TalkingHeads last night if it had been called “An Ordinary Man ” about a middle aged man in his 50’s having paedophilic feelings about his 15 year old daughter, would that have been “brave”, & would it have been called “incest” ? https://t.co/rEg2GjlAKA

So good to see #TalkingHeads tonight @BBCOne Imelda and Sarah superb. Just as I thought it might be becoming too quaint Bennett bowled a googlie. V clever. I wonder how we’d react if the protagonist in An Ordinary Woman had been the father.

However, there was one thing everyone was in agreement with – Sarah Lancashire is a powerhouse, second to none.

Therefore there are already calls for her to ‘win all the awards’ after she made them feel sorry for her character.

Sarah Lancashire was absolutely spellbinding. Not the easiest subject matter but what an incredible performance #TalkingHeads

That was disturbing, intriguing and so desperately sad all in one go. #SarahLancashire is just sublime. #TalkingHeads #AnOrdinaryWoman

Just wow. Sarah Lancashire was unbelievable. Give her all the awards going, she played it to perfection. #TalkingHeads

What other Talking Heads are available?

The whole series is available to watch on BBC iPlayer.

There are plenty of other big names set to star, for example Jodie Comer, Martin Freeman, Harriet Walter and Maxine Peake.

There is one more original, starring Monica Dolan, to come, but the rest are remakes of the classic 80s scripts.

Did you enjoy Talking Heads? Leave us a comment on our Facebook page @EntertainmentDailyFix and let us know what you think of this story.