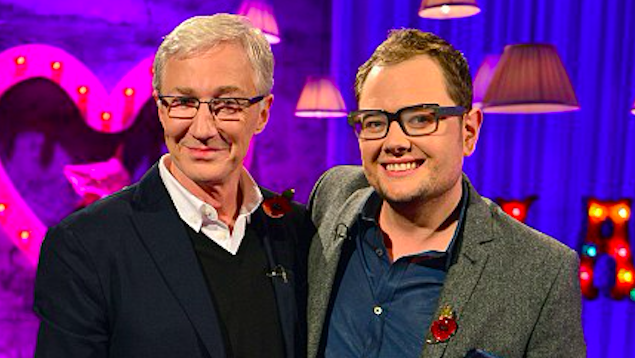 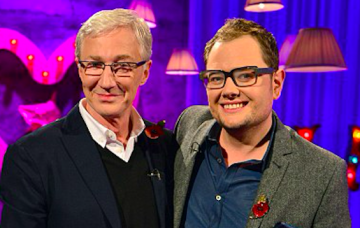 We're super excited about this revelation...

They’ve been friends for many years, but Alan Carr could now be in BIG trouble with fellow presenter, Paul O’Grady.

In a new interview, the 42-year-old host of Chatty Man confirmed RuPaul had bagged Paul, Graham Norton and himself as guest stars, when the famous drag queen launches her UK version of the series later this year.

The trouble is, the BBC had so far only announced him and Graham.

Speaking on Zoe Ball’s BBC Radio 2 Breakfast Show on Saturday, Alan said: “I found out that Paul O’Grady’s a judge on it, and so is Graham Norton. But isn’t it funny – no one said a word [to each other].

“We’re all going, ‘Oh yes, did you hear they’re looking for judges on UK Drag Race?’ ‘Hmmm, yes, I heard that!’ No one said a word. All keeping it secret!” 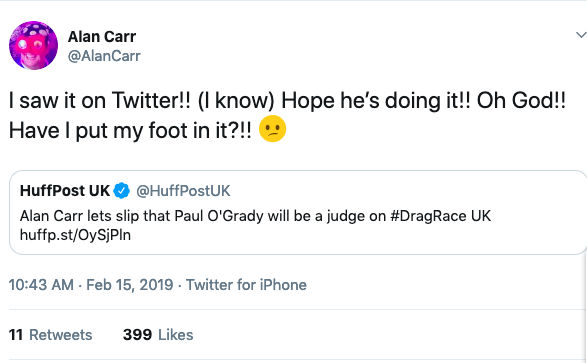 Fan favourite, and award winning Paul has yet to comment publicly.

But Alan better watch out. During an appearance on Chatty Man with Alan back in 2013, he once warned him: “I am not one to cross if I have a grudge.”

We think he’ll be safe with this one though!

The revelation comes days after Alan was touted as a dream name for the next series of Strictly Come Dancing.

Presenter Claudia Winkleman named the TV funny man as part of the ideal line-up on the dancing talent show. She also wants to see Liz Hurley, Michael Caine and Neil Kinnock on the dance floor.

And just like Alan, Claudia admits she’s no good at keeping celeb news under her hat – which is why BBC producers never tell her contestant names.

She joked in the interview with This Morning presenters Phillip Schofield and Holly Willoughby: “Now they tell me after they tell the press.

“One year it was very secret. Lock the door, phones off, eyes down – here’s who’s doing it. And I went: ‘Gotcha, don’t tell anyone.'”

She continued, hilariously: “Got in the lift at the BBC, it went down and somebody went: ‘Oh yeah, you do the Strictly show, do you know who’s doing it?’ Said the whole list of names.”

Are you looking forward to this show? Leave us a comment on our Facebook page @EntertainmentDailyFix and let us know.