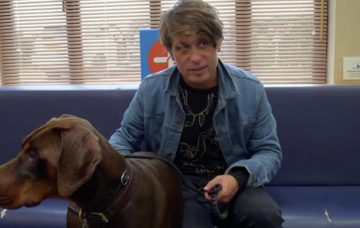 Take That star Mark Owen has been reprimanded by Channel 4’s Supervet for letting his beloved Doberman Arnold run free too soon after surgery.

The pop singer sheepishly admitted taking off the pet’s lead during walkies just a few weeks after Noel Fitzpatrick inserted a metal plate and screws to repair torn knee cartilage and warned him the dog needed rest to recover.

Mark confessed he hadn’t spotted a pair of deer in the field when he let 18-month-old Arnold loose and the pooch chased after them, re-injuring his leg.

It meant Noel had to delay a further operation to inject stem cells into the joint to prevent arthritis.

The vet had advised him: “The only thing really that could go wrong in my view would be if he were to lick it (the surgical scar) and get an infection or if he were to run and break his screws.”

In next week’s episode, Mark returns to the practice two months after the op because Arnold had started limping again.

He confessed to Noel: “I did make a little mistake. I took him out onto the back field. There was nothing around. You won’t believe what happened — two deer.”

The vet replied: “Now you tell me! And you wonder why!”

Mark said: “He had a scurry after two deer and I scurried after him. He looked so happy. He was trotting along.”

Noel said the exercise had caused additional damage, adding: “Just being frank with you, I think there was a little trama when he ran across the field.”

He ordered Mark to keep the dog on the lead for another four to six weeks.

The singer had assumed Arnold suffered the initial torn cartilage after “wrestling” with one of his other dogs, Arthur the terrier.

But the vet told him it was a common problem with the breed because their upright stance placed extra pressure on the knee joint.

Hearing that the animal required an urgent operation, Mark said: “I was hoping he would say, ‘Give him a paracetamol, he’ll be all right in a couple of days’.

“But I’m glad he’s here because he’s been miserable sat at home.”

Despite the setback, the operations were a success and Arnold was running free again within a few months.

Mark said: “Arnold is doing fantastically. He’s back out and about, off the lead. He’s very happy, bouncing everywhere.

“It’s been a bit of a challenge because it’s hard when you’ve got to keep him in confined spaces, but I’m just so relieved to see him back to himself again.”

* Mark features on Channel 4’s The Supervet at 8pm next Wednesday.