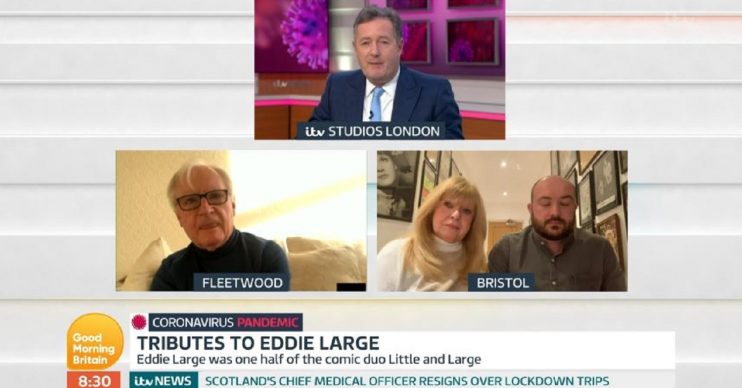 Eddie Large, 78, sadly passed away on Thursday, after testing positive for coronavirus.

He contracted the virus while in hospital with a heart condition.

Presenters Piers Morgan and Susanna Reid were also joined by his heartbroken widow and son.

Speaking from his home in Fleetwood, Syd gave a moving tribute to the other half of Little and Large.

The comedian spoke to Susanna Reid about the tragedy.

“It’s definitely been a emotional rollercoaster. Eddie was 90% of the act, I was 10. I miss him madly.”

He also shared his last conversation with Eddie.

“He was in a lot of pain. I tried to make light of the situation. He was moaning and I said “are you having an orgasm?”

Eddie’s widow Patsy Scott, who married the comedian in 1983, revealed she could not be with her husband at the end.

“I wish we could have been with him. Even trying to get a funeral together we still won’t be able to see him,” she said.

Tears appeared in her eyes as she explained the lockdown meant she could no longer visit Eddie in hospital.

“The lockdown came and we had to sort of not go in anymore and so it was heartbreaking,” she continued.

Son Ryan added: “As a father, as a husband, we couldn’t have asked for anyone better.”

“We’re so proud of everything he did with Syd, not just that work but also he was heavily involved with charity work.”

Many celebrities have shared their condolences on social media.

ITV’s presenting duo Ant and Dec took to Twitter to say: “So sad to hear about the passing of Eddie Large. We had the pleasure of working with him and Sid a few years ago.

“He just loved making people laugh. He will be missed.

“Our thoughts are with his family at this time. X”

Eddie Large died. Midnight Matinee Great Yarmouth 1978. They finished part one. I’d never heard laughter like it. Rude, raucous and rollicking.Dunno how they did it, but Eddies energy and electricity and impressions and props and improv were hugely impressive. R.I.P.

Watching Sid Little talking about the sad passing of his lifelong comedy friend Eddie Large fair brought a lump to the throat and a tear to my eye. A rich part of my comic tapestry growing up you will be greatly missed. Thoughts and prayers are with those closest to you#RIPEddie

The comedian from Glasgow became famous after winning Opportunity Knocks in 1971, with his partner Syd.

Eddie Little suffered from health problems, ultimately leading to the end of their act.

The pair last  joined forces on screen in February 2019, appearing  on a celebrity special of the BBC’s Pointless game show.

Read more: Dr Hilary Jones slams ‘idiots’ who went out at the weekend amid coronavirus pandemic