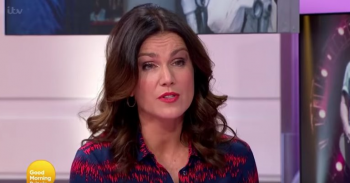 She's been shaken by the ordeal

Good Morning Britain host Susanna Reid has resorted to beefing up the security in her house after being burgled twice in the last month.

The 48-year-old broadcaster is said to be “devastated” by the back to back break-ins at her South London home.

In the first raid, Susanna’s family possessions and car were stolen and in the second incident thousands of pounds worth of electronics were taken.

The mum -of-three has apparently spared no expense to make sure her family is safe and has now had state-of-the-art alarms installed in her home.

A source told The Sun: “Being burgled once is bad enough, but having to relive it again for a second time is devastating. She has spared no expense on home security including state-of-the-art alarms.

“Any burglar should now think twice about trying their luck.”

Thieves first targeted Susanna, who has Sam, 16, Finn, 14, and 13-year-old Jack, on February 11 this year, but only one of her son’s belongings were stolen.

Susanna was then shocked to discover that her car had been taken from outside her residence.

Last Monday, she was reportedly burgled again, with police believing the intruder gained access via a window.

Susanna previously lived in the London house with her ex and father of her kids Dominic Cotton.

Susanna, who now dates Crystal Palace chairman Steve Parish, left the matter in the hands of the police, but the investigation has been closed because of a lack of evidence.

According to The Sun, police said: “As there were no suspects or CCTV images, the investigation was closed.

“The victim reported car keys taken from inside her hallway and her car stolen. The car was recovered nearby but no forensic clues were found.

“Again, as no suspects were identified the investigation has been closed.”

Ent Daily has contacted a representative for Susanna for comment.