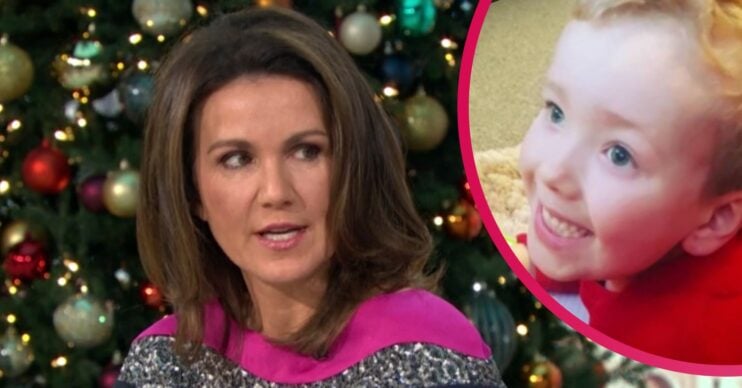 Presenter Susanna Reid admitted she was “stunned” on GMB earlier today during a discussion about the death of Arthur Labinjo-Hughes.

Susanna and Martin Lewis were joined by Wendy Thorogood of the Association of Child Protection Professionals for the Good Morning Britain segment.

But a moved Susanna, 50, seemed to take exception to Ms Thorogood’s words during a misunderstanding about safeguarding processes.

Social services were notified of concerns from members of Arthur’s family who found bruises on his body.

However, a home visit to where he lived in Solihull found “no safeguarding concerns”.

Emma Tustin has been jailed for life for murder. Her sentence carries a minimum term of 29 years.

Thomas Hughes was sentenced to 21 years for manslaughter.

What happened with Susanna Reid on GMB?

Susanna asked Ms Thorogood about the procedure for raising concerns as a family member. It has been reported that bruising was brought up by Arthur’s grandparent.

Ms Thorogood later reflected: “I want to pick up on this bruising because clearly it was shared with social services and the photo was shared with police. And I’m not criticising her actions at all, but I would have liked if she actually had that child in front of her to actually seek medical intervention as well.

“Because at that moment in time you can take the photo, you can use that for evidence. But health are part of the system as well and that could have triggered a multi-system assessment quicker.”

Susanna interjected: “When you say ‘she’ are you talking about the social worker?”

Ms Thorogood replied: “The grandmother. If she’s taken the photo… my plea for anyone out there who’s concerned about a child where there’s visible bruises is seek medical attention.”

.@susannareid100 and Wendy Thorogood from the Association of Child Protection Professionals discuss the missed opportunities to save six-year-old Arthur Labinjo-Hughes. pic.twitter.com/t4V0YYrwkz

Susanna Reid on GMB this morning

Susanna then replied: “I’m so sorry to interrupt you, but she went to social services. Are you saying that social services couldn’t intervene and therefore it was down the grandmother to seek further help?”

Ms Thorogood explained: “It would trigger an intervention. It triggered the actual point of a social worker going out but it’s the matter of delay and the severity of when that was seen and I wouldn’t disparage anyone of doing a referral.”

“I don’t understand why you’re suggesting the grandmother should have done more,” Susanna then said.

I want to really stress that I am not saying the grandmother could have done any more.

Ms Thorogood replied: “I want to really stress that I am not saying the grandmother could have done any more. But I’m just saying for future, if anyone sees any unusual bruising, seek medical intervention as well as sharing that with social care as that would trigger the process.”

“And if you’re told as the grandmother, ‘actually it’s down to you’…”

But Ms Thorogood responded: “I didn’t say it’s down to the grandmother. I’m saying at that moment in time the child could have been seen medically.

“My words are being sort of slightly twisted. I’m just saying that would have prevented a delay.”

Many viewers were split about the moment, Susanna’s presenting style and the best approach for social services to take.

Other Twitter users claimed cuts to social services staffing are also a factor to consider.

But despite the wide range of views on the segment, it was clear it generated a lot of debate on social media.

A post sharing a clip on Twitter alone racked up tens of thousands of views and hundreds of replies within hours of being shared.