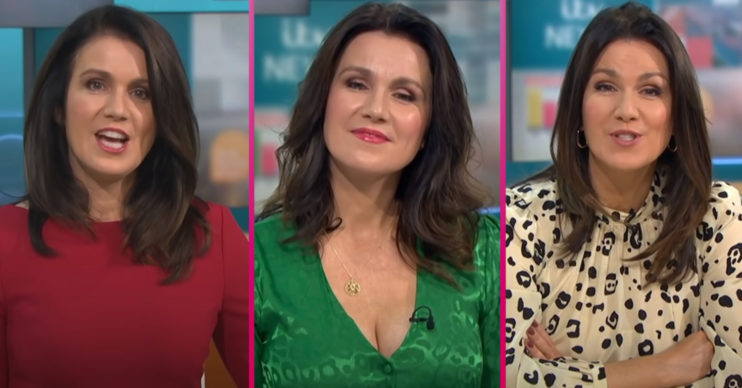 Some people called one of Susanna's looks 'inappropriate'

GMB host Susanna Reid has covered up on the show since sparking backlash with a ‘revealing’ dress.

Last month, the presenter was at the centre of much discussion after she wore a satin green dress on the programme on January 20.

Viewers took objection to the outfit, with some saying it was “inappropriate” because it showed her cleavage.

Susanna Reid covers up on GMB

Since then, the star seems to have chosen more conservative outfits.

The following day (January 21), Susanna returned to the show and wore a blue dress which covered up her chest.

She also addressed the complaints alongside her co-star Piers Morgan.

At the time, Piers joked: “I hadn’t really noticed because obviously I don’t objectify you in the workplace.

“I’m very relieved on behalf of the nation that you’ve decided to put them away today because we can’t cope with that kind of heat at 6:43 in the morning.”

Meanwhile, on January 25, Susanna appeared to cover up again.

The star looked incredible in a cheetah print silk midi dress which featured a high neck and long sleeves.

And, this time, viewers loved the look.

Another gushed: “@susannareid100 looking stunning in that dress this morning.”

The next day (January 26), Susanna sported a stunning red dress which featured a high neck.

She paired the dress with matching red lipstick and styled her hair in curls.

During this show, Piers and Susanna paid an emotional tribute to the 100,000 people who had died from coronavirus in the UK.

The next day, Susanna co-hosted the show with Ben Shephard.

She wore a green leopard print dress, which had a slightly lower neckline.

Meanwhile, this week, it seems Susanna has continued to cover up.

On Monday (February 1), the star looked incredible in a light blue dress which featured a high neck and a bow.

On yesterday’s show (February 2), the mum-of-two sported a red and white floral dress.

It featured a v-neck and long sleeves.

She and Piers hosted a special on Captain Sir Tom Moore following his death on Tuesday.

Sir Tom passed away in hospital at the age of 100 after battling COVID-19.

Which outfit of Susanna’s is your favourite? Leave us a comment on our Facebook page @EntertainmentDailyFix and let us know.