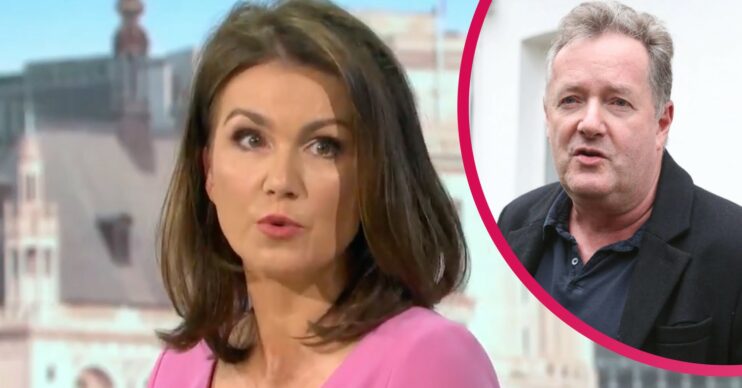 Piers walked out of the GMB studio in March

The presenter walked off the ITV programme back in March, following a clash with weatherman Alex Beresford.

Now, Susanna has opened up on her feelings towards her former co-host – and why she thinks he won’t return.

She added: “I didn’t think he’d really leave the show. That was definitely another shock. The whole thing was intense, raw and emotional.

“Piers had been the person I’d sat alongside and forged a successful partnership with for five years.”

In addition, Susanna also addressed the rumours her former co-presenter could return.

But the star, who has hosted alongside a string of famous faces since, says it’s unlikely.

She continued: “He’s not left ITV – he’s still doing Life Stories. But no, he won’t be back on the GMB sofa.”

The journalist and author, 45, appeared on the programme to promote her new book.

And it didn’t take long for talk to turn to Piers.

Susanna, who Piers often referred to as his ‘work wife’, introduced Celia as “the real wife”.

During her appearance, Celia joked: “You were a far better wife than I was!

“People were trying to play up the rivalry between me and Susanna, but we were like, ‘no you should hear the conversations we have.'”

Furthermore, Celia opened up on her husband’s future plans.

She shared: “He’s got some irons in the fire. I don’t think he’ll be kicking around the house for much longer.”

And it appears that Piers already has a new job on the horizon.

Speaking in his Daily Mail column, the journalist recently hinted: “I put that post on social media asking if I’d get my job back to prove a point.

“I wouldn’t go back, not without a public apology and I’m not going to get one.

“I’ve got much bigger things coming up. The future is exciting.”