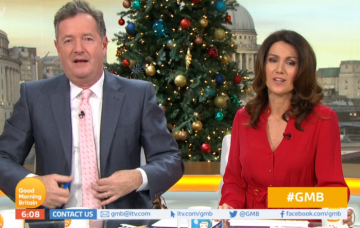 She has already lost over one stone

Good Morning Britain’s Susanna Reid has revealed she doesn’t do any exercise and recently lost over a stone in weight without even stepping foot in a gym.

The 48-year-old insists her recent weight loss is all down to a healthy eating regime and cutting out alcohol.

Piers Morgan, who had just given her a hamper of healthy foods for her birthday as they presented Good Morning Britain, told her: “You don’t do anything, you exercise and eat kale.”

But Susanna quickly hit back saying: “Actually I don’t do any exercise at all. I stopped going to the gym, I found it made me too hungry.”

She also complained about her new teetotal lifestyle saying: “The worst thing about being alcohol-free, you’re basically awake all the time, you obviously don’t sleep.”

Piers prodded her about how much longer she would be dieting for and how much more weight she wants to lose, and Susanna replied: “I’ve levelled out. I’ve lost a stone-and-a-half and that’s enough, and I don’t go to the gym.”

The mum-of-three previously confessed she missed alcohol after cutting it out in an attempt to improve her health.

She admitted on the ‘Is It Just Me?’ podcast: “I really miss it. When you are in a big social group and the shots come out. I miss letting my hair down.”

Susanna also revealed to boxer Tyson Fury that she had been taking on his diet tips.

During an interview on Good Morning Britain, she told him: “You suggested that I eliminate, well take away, milk from my coffee, so now it’s black coffee only. Thank you very much for that tip!”

The presenter, who has been dating Crystal Palace chairman Steve Parish, recently revealed that she has no plans to walk down the aisle any time soon.

She joked on the show: “The makes me come out in hives, the idea of getting married.”

Do you think you can stay in shape without hitting the gym like Susanna? Leave us a comment on our Facebook page @EntertainmentDailyFix and let us know what you think!