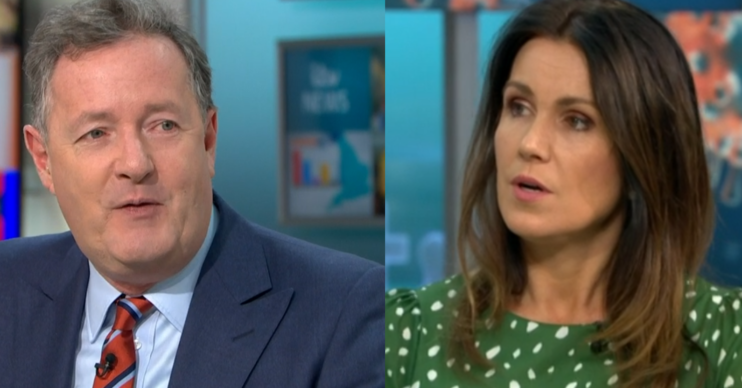 The GMB host accidentally ruined a huge exclusive that wasn’t supposed to be revealed until later on in the programme.

While discussing upcoming guest Captain Tom Moore with Piers Morgan and Dr Hilary Jones, she pulled out a copy of his autobiography.

However, the book, titled Tomorrow Will Be A Good Day, wasn’t supposed to be unveiled until his scheduled interview.

Realising what his co-host was doing, Piers was quick to pull Susanna up on her blunder.

Looking a little miffed, he said: “I think we’re supposed to be revealing this later aren’t we?

“I think you may have just ruined everything. That was supposed to be a secret!”

Susanna then gazed at the camera rather sheepishly as she held up a copy of the book.

The presenter then defended herself and insisted the book cover had appeared in the papers already this morning.

But the title and cover of the book hadn’t been revealed – it was Good Morning Britain’s exclusive.

Piers hit back at his co-host: “Well it shouldn’t’ have been because it was our big secret.”

Changing the subject quickly, he then called on viewers rot send in. questions for the war veteran.

He said: “Everyone feels like they know this guy but they don’t really.”

However, he is planning to donate the huge cheque to charity, according to The Sun.

Under the agreement, the 100-year-old war veteran will also write a children book and cookery book inspired by WWII.

The pensioner hit headlines after raising an incredible £32.8million for NHS Charities Together by walking up and down his Bedfordshire  garden during the coronavirus pandemic.

Since then, he has been awarded the prestigious Freedom of the City of London honour, which dates back to 1237.

Usually, the ceremony is held at London’s Guildhall, however, a virtual ceremony was hosted via YouTube instead due to lockdown.

After receiving the honour, Captain Tom said: “I am deeply honoured to be granted the Freedom of the City of London.

“I remain humbled by the love and gratitude that I have received from the British public, and this honour is something that I will truly value for the rest of my life.”