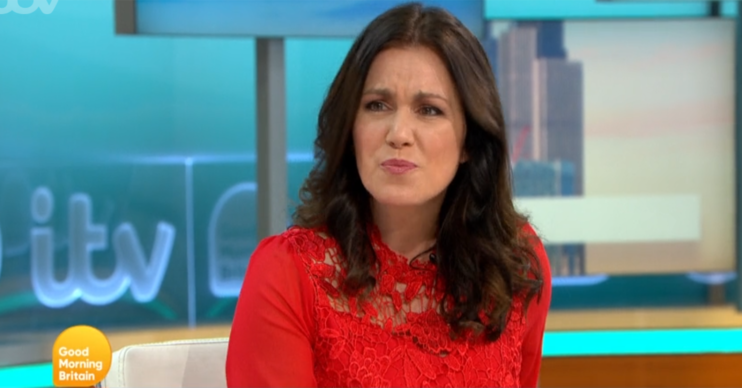 Susanna said she "didn't get fitter" during lockdown

Susanna Reid has said she’s put on weight during the lockdown on GMB today.

On Thursday’s show, the star was interviewing Eddie Izzard about her running 31 marathons in 31 days for charity.

Susanna, 50, said she “didn’t get fitter” during lockdown and ended up with a “lockdown stone”.

What did Susanna Reid say about her weight?

She told Eddie: “Most of us or many of us during lockdown, actually I can’t talk for everybody I can only talk for myself, frankly I didn’t get fitter.

“I did just put on a few pounds and I’ve ended up with a lockdown stone.”

Her co-star Adil Ray said: “You went for your walks.”

Susanna replied: “You tried to encourage me to go for walks.”

Turning to Eddie, she said: “You used the opportunity to get super fit Eddie, I just can’t… running for six hours is unimaginable for most people.

“To actually then do half hour interviews while you’re running, I mean are you some kind of super human?”

Meanwhile, minutes later, Susanna made another comment about her weight.

Andi Peters was presenting the competition segment and had some hot cross buns.

“Which would you choose?”

Putting her hands on her stomach, Susanna replied: “I don’t think I can have a hot cross bun.”

Adil said, “You could! Come on,” to which Susanna added: “No, no, no, lockdown pounds are really… alright I’ll have all of them!”

Meanwhile, at the start of the programme, Adil appeared to make a cheeky joke about Piers Morgan’s exit.

Opening the show, Adil asked: “Great to be back. Have I missed anything?”