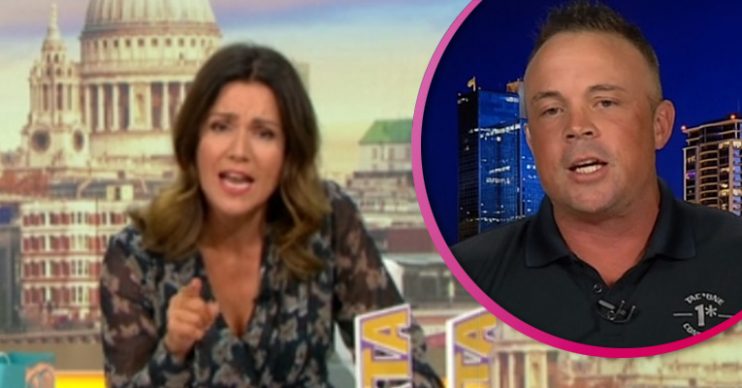 Susanna Reid lost it with a Good Morning Britain guest during Tuesday’s show.

The presenter and co-star Piers Morgan were interviewing Joe Deedon, who trains children as young as four to protect themselves in mass shootings.

Joe said he offers two-hour training sessions to kids to show them how to attack someone with a gun.

‘It’s providing them [children] with options. It’s a harsh reality.’

However, Piers and Susanna asked Joe why he doesn’t put his efforts into removing guns in the US instead.

Susanna said: “I cannot understand how it doesn’t frighten the life out a 10-year-old child, to think that they are sitting in class, and they have to have on their mind the possibility that someone might come into their school, armed to the teeth in order to kill them and they might have to take that individual down.

“They’re children they shouldn’t have to think about this.”

Joe interrupted: “Susanna is your microphone on? Does your ear piece work?” to which Susanna replied: “Yes, but normally when we ask a question the guest allows us to ask the question before they answer.”

Joe asked: “Can I respond?”

Susanna said: “Yes you can but you were asking if I heard you and I heard all of your interruptions. Now you can go ahead and answer.”

Joe continued: “It’s age specific. All we are trying to do is give them more options that can safely remove them.”

Piers cut in: “How many guns do you have?” to which Joe revealed: “I have about 25 of them,” as Susanna shook her head.

Piers asked: “Why?” to which Joe said: “It’s my right to have them and I love to shoot them. I’m a former law enforcement officer and I have to run a training company so they’re tools of the trade.”

Susanna interrupted: “There is another option to get rid of them.”

Joe said: “The easy thing for you to do is point a finger at the guns,” as Piers cut in: “Yes it’s a very easy thing to do Mr Deedon because we live in a country that doesn’t have guns.

“Why don’t you try taking some of these guns away from people who are going to use them to shoot people? Why doesn’t that simple idea never cross your mind?”

Joe said: “There are certainly a lot of people who shouldn’t have firearms but there are 99% of law-abiding citizens that do have them that don’t commit crimes.”

Piers asked: “Why do you need 25 guns?” to which Joe said: “Because that’s my prerogative. I’ve never committed a crime with them.”