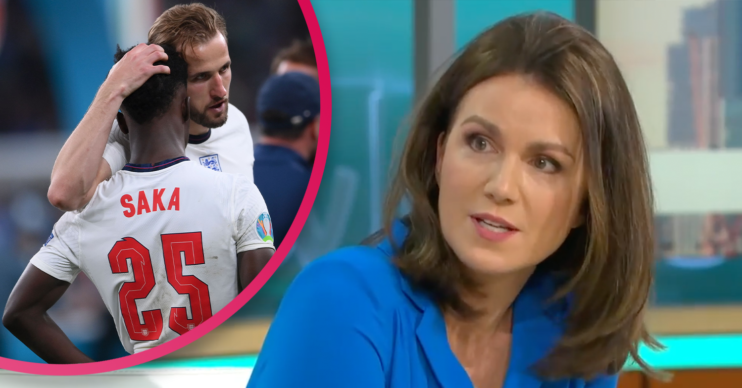 She was called a 'snivelling cow'

Susanna Reid has ignored cruel trolling on Twitter which saw her branded a “snivelling cow”.

It comes after Susanna was abused by a troll after breaking down on GMB earlier this week.

So what happened with Susanna on GMB?

Susanna was moved to tears as a nine-year-old boy called Dexter appeared on the show to discuss a letter he’d written to footballer Marcus Rashford.

Rashford himself tweeted the letter from the young football fan.

It started: “Dear Marcus Rashford, I hope you won’t be sad for too long because you are such a good person.

As he read out the letter, Susanna teared up – much like her co-host Ranvir Singh when they discussed the issue later in the week.

However, not all viewers were moved to tears. In fact, one GMB viewer was prompted to target Susanna with vile abuse.

According to Chronicle Live, a nameless troll tweeted the star to slam her tears.

Susanna is said to have reposted the tweet on her own timeline, but it has since been deleted.

His letter of encouragement was tweeted by Marcus Rashford when he thanked everyone for their support. 9 year old Dexter’s lovely words left me and Ranvir in bits. Thanks for coming into the studio, and for being a star. #ProudOfYou #MarcusRashford pic.twitter.com/RTo6bOyvAD

However, many of the presenter’s followers did see the tweet and took the writer to task.

After the woman responsible answered back in the thread, one of Susanna’s followers responded: “Only racist people have a problem with people getting upset about people being racist, just so we’re clear.”

“You don’t know genuine decency when you see it, your loss, sad and shame on you in every way,” they added.

Another posted the definition of woke: “In other news ‘woke’ literally means ‘aware and awake’. It’s decency. Bye!”

She didn’t post a caption but the post apologised for his part in England’s loss and slammed the racist abuse he has been subjected to since.