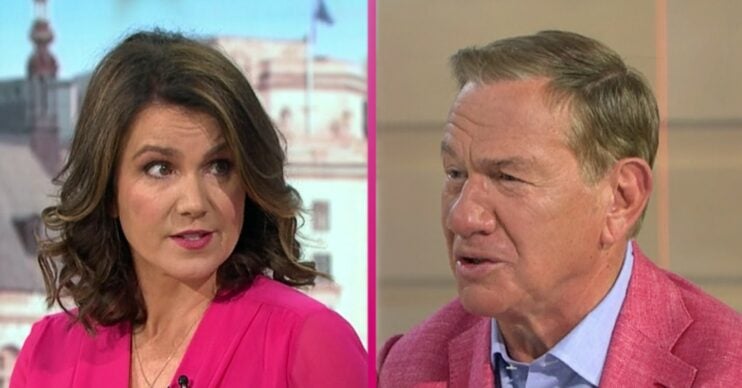 She was grilled about her own wages

Susanna Reid looked “uncomfortable” on GMB today (October 7), after she was questioned about her salary.

The presenter, 50, was discussing Boris Johnson’s party conference speech and the cost of living.

However, talk soon turned to Susanna‘s own wages.

Mr Bottomley earns over £81,000 per year as an MP, but told The Spectator that he thinks MPs should get a pay rise.

Read more: The Real Manhunt presenter Susanna Reid on the incurable condition she’s suffered since the birth of her son

Michael said in the discussion that he agreed with Mr Bottomley.

After Susanna and co-host Ben Shephard hit back, that’s when things got uncomfortable for the host.

Michael asked Susanna: “Or TV presenters? What about that?

“What if they were paid as the same as TV presenters?”

“The difference is, of course, is that TV presenters aren’t paid out of the public purse, this channel, so I am not sure the comparison applies,” Susanna replied.

Michael continued: “Are you saying that because people work in the public sector there can be no market consideration?”

How did viewers react to Susanna?

“Susanna Reid haughtily dismisses this saying she is not paid by public purse – well advertisers put that in their bottom line pass this onto customers no Socialist Susanna it’s morality.”

In a reply to one tweet, another said: “I did notice the uncomfortable nature of that exchange. However, @susannareid100 rightly points out, that’s not public money.

“I do however think they get enough for what they do, or don’t do in the [Tory’s] case.

“If our nurses who save lives are on a minimum wage, there no recourse.”