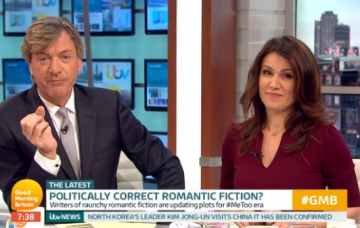 Richard Madeley has been proving just as headline-generating as Piers Morgan, who he has been standing in for on Good Morning Britain this week.

Susanna Reid explained at the start of Thursday’s show how the former This Morning host has “come under fire” for a comment he made to weather forecaster Lucy Verasamy, 37, yesterday.

After Lucy jokingly said her denim dress might shrink in the rain, Richard quipped she should go outside and test that theory.

Not all viewers found it funny, however, with some calling Richard’s joke inappropriate.

Today, Richard’s colleagues, including Susanna, stepped in to defend him, with Lucy herself saying she’d taken it all in good humour.

Lucy said: “Everyone just wants the weather girl in the pouring rain, surely? Suffering, battling with a brolly.”

Ben Shephard also had an explanation for why Richard was so keen for Lucy to test out her dress in the wet weather.

“Richard has been a consumer journalist all his life so he was interested to see what happens to the fabric for the nation,” he said.

Susanna agreed, saying: “It’s an experiment in the public interest.”

Lucy said she made the comment about her Dolly Parton-inspired outfit as she was sure she’d heard that denim either “shrinks or gets heavy” when it’s wet.

Susanna then admitted the furore was actually all her fault, as she was the one who had warned Lucy not to go outside in the first place.

“I was just looking after your dress!” Susanna said.

While Richard’s colleagues all laughed about the incident, it may have influenced Lucy’s latest wardrobe choice.

On Thursday, she switched the denim for a much more conservative white blouse with black trousers as she presented the weather.

Meanwhile, Richard took to Twitter to thank viewers for the positive feedback he’s had over the last week.

He said: “Thanks for all the really positive messages about my toils on GMB this week. Hugely appreciated. Especially with those 3am starts!”