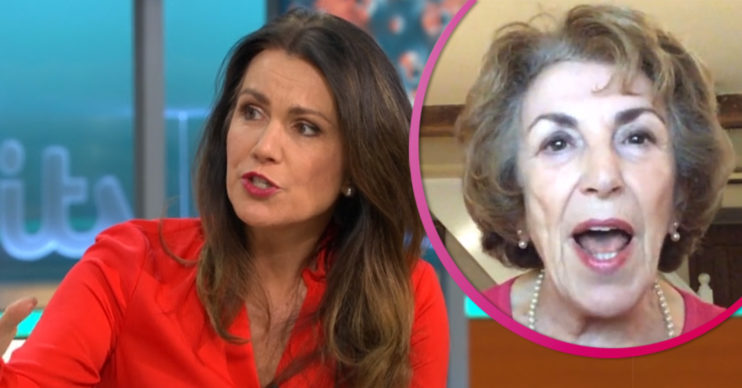 Edwina accused Susanna of not reading the government's plan

The former politician appeared on Tuesday’s programme and accused Susanna of not reading the government’s plan to tackle the coronavirus.

However, Susanna was just discussing the confusion from people over social distancing and seeing people from other households.

On Sunday evening, Prime Minister Boris Johnson addressed the nation to explain the first steps in their plans to reopen society.

Among the new rules, we can see one member of a separate household but at a distance.

However, people are allowed to visit public places surrounded by strangers as long as they keep a distance.

Susanna questioned why she can be surrounded by strangers in parks but is only allowed to meet one person she knows.

The presenter said: “We’ve been told these measures are all down to our good British common sense.

“[They’ll be thinking], ‘If I can see someone at work, why can’t I see a couple of members of my family outside in a park?’

However, Edwina said: “Well Susanna, the way you’ve put that question suggests to me you haven’t actually read the government’s 50 page plan…”

Susanna cut in: “Can I just put you right?

“Because I have read every word of the government’s 50 page plan.

'Why can a cleaner come into my house but neither of my sons can do the same? @piersmorgan challenges Edwina Currie on the confusion surrounding the government's new guidelines allowing cleaners to enter people's homes but restricting contact with family members. pic.twitter.com/YDjDbgWbBE

“Which bit of it says I can meet my whole family outside on the common?”

Susanna interrupted: “But hang on, if I’m on the common, I’m meeting lots of other households. I just don’t know them.”

Edwina replied: “With all due respect, I want to know from you what is it about social distancing and washing your hands you don’t understand?”

“But I’m only allowed to actually know one of them.

“So I can be on the common two metres away from lots of people I don’t know but I’m not allowed to know more than one of those people.

“If I see someone else that I know I have to move away from them to other people I don’t know.”

Edwina exclaimed: “You’ve got it!”

In conclusion, Susanna replied: “Brilliant. That’s total common sense! As long as I go home and wash my hands, everything is absolutely fine.”

What do you think of this interview? Leave us a comment on our Facebook page @EntertainmentDailyFix and let us know.