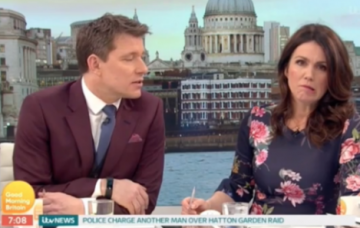 She was in a rush to start her Easter break!

Susanna Reid was already dreaming of her Easter holidays as she fronted Good Morning Britain today – which led to her making a major slip-up.

The 47-year-old mum-of-three announced the wrong time, telling viewers it was eight minutes past eight when it was actually just after 7am.

Her on-the-ball co-host Ben Shephard was quick to correct her mistake, telling her: “Seven! Don’t get rid of an hour!”

“Oh no, I’m racing ahead,” an embarrassed Susanna replied.

“She’s desperate to get to her Easter holiday and those Easter eggs!” Ben then joked.

Susanna agreed saying: “I leave the building at 8.30 this morning – that’s it!”

However, Kate Garraway then became concerned that her colleague’s comment could be taken the wrong way by viewers, who may fear she meant she’s leaving for good.

“You are coming back to the show though, don’t panic people,” said Kate. “You’re not leaving.”

Ben also reminded viewers that GMB would still be on next week, even though Susanna and Piers Morgan will be taking time off.

“People will be much more panicked by the time check I just gave than by the fact I might be leaving!” Susanna then joked, worried that she’d sent viewers into a frenzy that they must be late for work.

She added that her gaffe was annoying as it meant: “When people complain I’m not going to be able to say you’re on plus one and you’ve got the time wrong.”

This is one of Piers’ major bug bears on the show as he regularly rants about viewers who tune into the programme on ITV plus one, and then contact them to tell them the time is wrong on their clock.

GMB gets so many complaints about it every day, the show has written on the bio of its Twitter account: “Our clock isn’t wrong – you’re on ITV +1!”

When the show returns next week it will be from a new studio as ITV is currently relocating shows while it revamp its facilities on London’s South Bank.

Susanna will be taking time off over the Easter school holidays with Kate Garraway likely to step into her shoes.

Meanwhile, Richard Madeley has been covering for Piers while he enjoys his annual leave.

Did you notice Susanna’s gaffe on today’s? GMB? Leave us a comment on our Facebook page @EntertainmentDailyFix and let us know what you think!