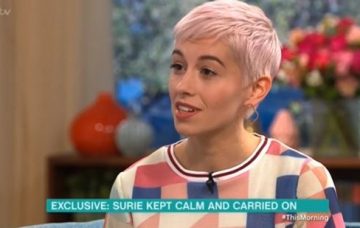 She said there was no time to feel any fear

SuRie has revealed she was left with bruises on her hand and a sore shoulder following the stage invasion at Eurovision on Saturday night.

The UK’s entrant had been mid-way through performing her song Storm when a protester ran up to her, grabbed the microphone and shouted about the UK media.

Security grabbed him just moments later, but there were a few seconds when SuRie was unable to sing as she didn’t have a microphone.

She’s now given her first interview about the incident, telling ITV’s This Morning: “That was a night of surprises, it really was.”

When asked if she’d been injured, SuRie said: “There are a couple of bruises [on my hands] from where I was holding the mic but I’m okay. My shoulder where he came in as well.”

She agreed with Phillip Schofield the incident was “more serious than a prank”.

SuRie said she’d not realised the intruder was on stage until he was right in her face, saying it all happened too quickly to really feel scared about what might happen.

She said: “There wasn’t any time to feel fear, there wasn’t. He was suddenly there, security were on him as quick as he was on me.

“He got the mic – for a few seconds it was out of my hands but the song was still going, the backing vocalists were still singing, the crowd were still chanting.

“I just turned upstage for a moment but I was still clapping and actually cheering with the crowd. I just didn’t have the mic. I turned back saw the mic on the floor and I thought, ‘well that’s mine, I’ll finish the song’.”

SuRie said she was “determined” to finish the song, adding: “The lyrics took on a new meaning, ‘Hold your head up, don’t give up!’ The crowd, the surge from them, that’s my lasting memory of this.”

The singer was given the opportunity to perform again at the end of the show, but declined.

“You don’t get to do the 100-metre sprint at the Olympics again because your shoelace is untied.

“You had that one shot, and that was my one moment.”

SuRie continued: “We didn’t need to repeat that; we had those conversations backstage but I saw the reaction and faces of my team and they were proud of the recovery and power of that, and we didn’t need to go again.”

She dismissed Phillip’s suggestion it was a shame she hadn’t finished higher due to a ‘sympathy vote’, saying she wouldn’t have wanted that.

“I don’t want the sympathy votes,” she insisted. “The point of the Eurovision, it began a few years after World War II when everyone is reeling from sadness and fear and they bring nations together to sing their way out of it.

“That’s the point of the song contest. It’s such an amazing thing to be part of. The Instagram feed and Twitter feed [were my scoreboard]. The UK crowd who have rallied around you.”

SuRie finished 24th out of 26 contestants.

A statement released by the Eurovision organisers said: “The EBU regrets a stage invasion took place… The person responsible is currently in police custody.

An investigation is currently underway.

What was your favourite entry in this year’s Eurovision song contest? Leave us a comment on our Facebook page @EntertainmentDailyFix and let us know what you think!