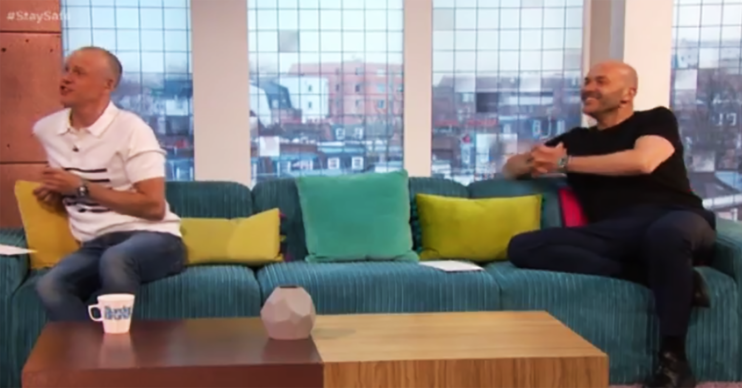 Comedian Julian Clary had Sunday Brunch viewers in hysterics with his trademark innuendos and cheeky humour as he teased hosts Simon Rimmer and Tim Lovejoy.

The 61-year-old actor took part in a cheese tasting via a video call, but still managed to steal the show.

Julian immediately opened his slot with a coy remark of not being able to tell Simon and Tim apart. His cheeky jibe even extended when he asked Tim where his t-shirt was from.

Julian continued. “Well, you’ve made an effort for me…Did you go down the market for that T-shirt?”

The genius of you two is you’re so ordinary…

Tim and Simon burst into laughter with Tim saying: “Julian every time I talk to you, you hammer me.”

Even from this initial exchange, viewers were happy to see Julian. One viewer shared: “Love Julian Clary giving Lovejoy a good roasting on #SundayBrunch.”

Another said: “Julian Clary never ages does he? Just as fresh, facially and comically, as ever!”

Another shared: “Julian Clary is killing me! So, so funny!”

The cheekiness didn’t stop there either. Another one came minutes later as Julian said: “The genius of you two is you’re so ordinary…”

SundayBrunch continued with a cheese tasting session, as Julian, Tim and Simon were joined by Morgan from Cheese Muswell Hill.

As the show continued with expert Morgan guiding them through various soft cheeses, Julian couldn’t resist the urge to get one of his trademark innuendo jokes in. Remarking on one sample, he said: “It’s lovely (cheese), I’d like to get behind that farmer as well!”

Another shared: “I’d like to get behind that farmer as well” accompanied by numerous laughing emojis.

Sunday Brunch will be back on Channel 4 on Sunday 19th July from 9:30am.