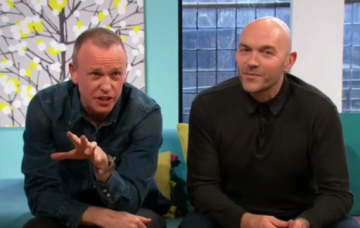 Made In Chelsea star caused an embarrassing blunder

Sunday Brunch presenter Tim Lovejoy issued an apology to viewers today after a naughty guest accidentally swore while being interviewed.

Reality star Alik was on the sofa alongside fellow Chelsea resident Ollie Proudlock, talking about his career.

After Tim asked a question about why Alik had left behind a job at his father’s textile business, Alik dropped the swear-bomb.

Alik said: “You have to identify the type of person you are and it became very clear that I wanted to be in some form of entertainment and not work at this desk job.”

He then continued: “So it was [bleep] or get off the pot,” before realising his mistake, saying: “Oh, I can’t curse.”

No you can’t in the morning on live TV!

He said: “Oh, let me just apologise for that,” before shooting a “Yeah, don’t say that” at his guest.

One wrote: “That crash you just heard was the floor manager fainting.”

Another said: “What did the MIC guy just say on #SundayBrunch? Love a swear live on air!”

After the gaffe, Tim got things back on track quickly enough, and the rest of the show passed without a hitch.

Meanwhile, Sunday Brunch wasn’t the only show apologising to viewers for bad language this weekend.

Ant McPartlin had to say sorry during Saturday Night Takeaway when a stunned guest mouthed “[bleeping] hell” after being chosen to play Win The Ads.

Ant said: “Well done, Louise. Now, I have to apologise for any bad language somebody may have mouthed when they were surprised. Say sorry, Louise.”

Ant replied: “She’s sorry about that!”

Have you ever had to apologise for swearing at an inappropriate time? Leave us a comment on our Facebook page @EntertainmentDailyFix and let us know!