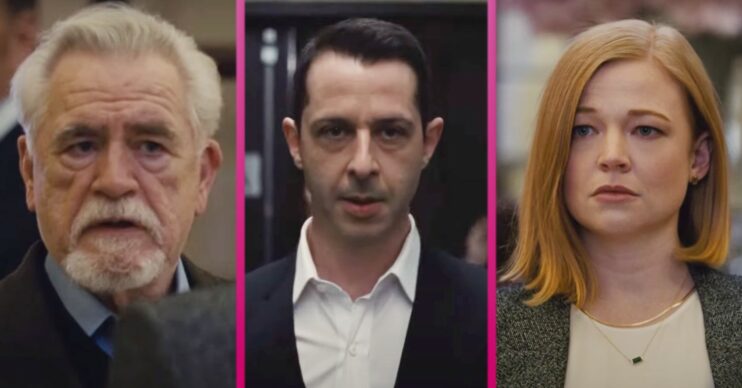 Succession season 3: Everything you need to know as first look teases family war

The revolution will be televised!

Succession season 3 is finally on its way and fans need to get ready for war as the Roy family becomes divided.

The high-flying media moguls are back in the spotlight in a bad way after a disastrous press conference that marks the start for a fight for power.

The teaser, released on Tuesday evening, proves that the family will need to pledge their allegiances, with dire consequences for those on the wrong side.

But who will Team Logan, and who will be Team Kendall?

Here’s everything you need to know about the trouble ahead…

What happened in the Succession season 2 finale?

Logan Roy is one of the biggest media moguls in the world – and as it turns out, there was a fair bit of corruption involved to keep him there.

Following a scandal involving the Waystar RoyCo cruise ships, Logan brings his family on holiday and announces that ‘there needs to be a blood sacrifice’.

Basically, he wants one of them to take the fall for his mistakes.

While the decision is debated, it finally falls on the ever-scrambling Kendall to step up.

However, after years of trying to be ready to replace his father, a cruel chat reveals Logan never thought Kendall was cut-throat enough to have what it takes.

Devastated that his years of efforts have proven worthless, Kendall prepares to make his confession and go to jail.

And then, at a press conference, he spins on his heels and directly points the finger at his father.

In the final moments of the episode, Logan is seen smirking on board the family yacht, while the rest of the Roy clan watch the conference in shock and horror.

What’s in store for Succession season 3?

Succession season 3 will pick up in the aftermath of Kendall’s declaration, with the family having to think fast about what to do next.

Siobhan will pledge her allegiance to her brother – at a cost.

Cousin Greg is still doing the busybody work for his boss (and Siobhan’s husband), Tom.

But with such a prestigious empire crumbling from the top down, it seems that there are business sharks ready to snap at their heels to take over.

There will also be ties into the White House, as the company’s political ties continue to get muddier.

This season there are more stars joining the already bumper ensemble cast.

Adrien Brody will guest star as Josh Aaronson, “a billionaire activist investor who becomes pivotal in the battle for the ownership of Waystar.”

When are the new episodes released?

Succession season 3 will be released on HBO in the US and Sky/NOW over in the UK.

While the team is yet to give a precise date, we know that the new episodes will arrive in Autumn.

So keep an eye out around August/September/October.

In the meantime, all previous episodes are available on HBO Max and NOW.

Succession seasons one and two are available on NOW.