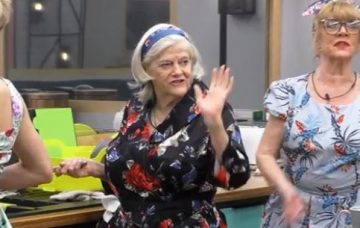 Yes. Really. We are not joking.

But that’s just what happened when Ann, 70, got into a debate with Maggie Oliver, 62, yesterday on the true meaning of glory hole.

The short exchange was aired on Celebrity Big Brother’s Bit On The Side after being introduced by a very amused Rylan Clark-Neal.

It was Maggie who unwittingly initiated the whole thing by telling some of the housemates about a cellar she’d once been in which had a coal hole.

As Maggie tried to remember another name for the coal hole, Rachel Johnson piped up: “Glory hole?”

Amanda Barrie chimed in: “No, that’s something else!”

Ann agreed, telling Maggie: “A glory hole is an under stairs cupboard.”

It’s not the definition of glory hole familiar to quite a few of us, however, including Maggie, who replied: “No, a glory hole is in a brothel… isn’t a glory hole where you have a peep hole?”

But Ann said: “No, my love. A glory hole, honestly, is the cupboard under the stairs where you stick everything.”

To be fair, both Maggie and Ann were right.

The Oxford English Dictionary does indeed define glory hole as a small, untidy room or cupboard used for storage.

However, in recent years the word has come to garner a different meaning: a small hole in a wall through which people can initiate sexual activity or watch one another.

We’re not sure how Ann would react to that definition, though!

BOTS host Rylan pretty much spoke for all of us last night when he reacted to the exchange by holding his head in his hands.

“Just clip it up!” he laughed. “Ann Widdecombe said glory hole, guys. Clip it up! That’s a gif!”