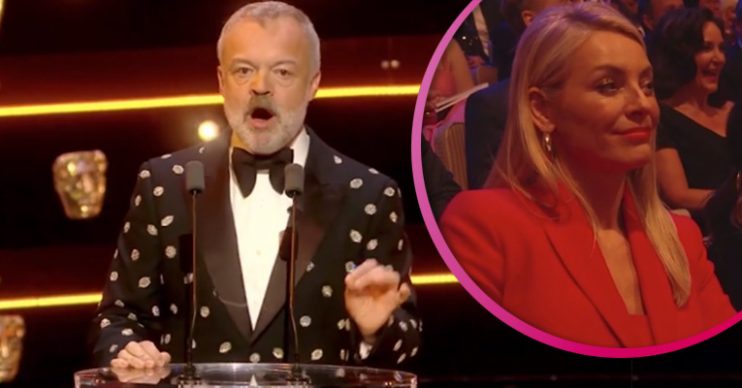 She was left shaking her head

Katya and Seann, who were partnered together during last year’s series, both apologised after they were caught kissing after a night out in October 2018.

During the Bafta TV Awards last night, Graham poked fun at the scandal leaving Tess shaking her head and co-host Claudia Winkleman burying her face in her hands.

Graham said during the opening monologue: “Line of Duty, everybody loved it.

The camera then cut to Tess and Claudia sitting in the audience and they didn’t look too impressed.

Tess, 50, closed her eyes and shook her head as Claudia threw her hands over her mouth.

But Graham didn’t stop there with the joke, and added: “You snog one dancer, ugh.”

During the series last year, Seann and Katya apologised after the photos emerged of them kissing after a night out.

During an appearance on Strictly’s spin-off show, It Takes Two at the time, Seann said: “I’m sorry for the hurt I’ve caused… We had a couple of drinks. We made a huge mistake and I regret it deeply.”

Seann was publicly dumped by his girlfriend Rebecca Humphries, while Katya and her husband Neil Jones have remained together.

Katya and Neil recently spoke about the scandal during an appearance on Lorraine, saying they’re “over” the kiss.

Neil said: “For me it was a major shock, and I appreciated that Katya told me before I saw it.”

Katya added: “There was lots of different emotions… And I think now that we’ve moved on, you might even forget how you felt at that moment.”

Netflix Halloween films and TV series to watch this October