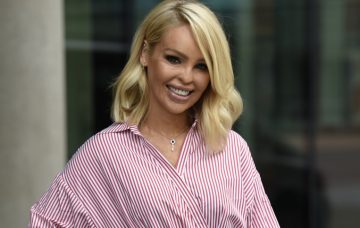 She says she is doing nothing of the sort

Katie Piper has spoken out against social media users who criticised her for posting images of her meals and health regime online.

Speaking to Women’s Health magazine, Katie, who is dancing with Gorka Marquez on this year’s show, addressed some of the less than complimentary comments she had received on her Instagram account.

It would seem that some of her followers are a bit… intimidated by her fitness routines and pics of her carefully balanced dinners.

And apparently, some of them vocalised their annoyance, and accused the star of making other mums feel ‘bad’ about themselves.

Katie told the mag that her posts made ‘some people cross’, but was adamant she was not setting out to make anyone feel bad about themselves.

“There are people online who, when I put pictures up, say, ‘you’re making mums feel bad!’ And it’s like, if you feel bad about this photo of me, those are your personal insecurities,” she insisted.

“I’m not about making people feel inadequate, trust me.”

Sharing a photograph of her cover shoot for the magazine on her Instagram, Katie said she was ‘2 baby’s down and feeling in control of my body and mind finally’ (sic).

And far from a sea of negativity, most of her fans leapt on the post to congratulate her, describing her as ‘amazing and inspirational’ and ‘super fit’.

Katie also revealed to Women’s Health that she caught the fitness bug after using exercise as a way to fill her days.
“I started spending my weekends doing races. Then I progressed to a half-marathon and I actually enjoyed it,” she said.

Read more: Is Christine Lampard set to replace Holly Willoughby on This Morning?

“It was in this moment that I connected with exercise. I was like, ‘I feel free – I feel young. I’m not going to accept those low expectations’. Instead of getting better, I wanted to go beyond.”

Katie also spoke candidly about having endured depression, particularly after the birth of her most recent baby, Penelope, now nine months old.

“When you have another child, you have no downtime. I did feel depressed and low, but your body is going through changes, physically and hormonally,” Katie said, adding that in order to combat her low feelings she tried to “check in on myself, to make sure it wasn’t spiralling”.

Katie, who married her partner Richard Sutton in 2015, is also mum to Belle, four.

We reported previously how Strictly bosses were said to be upping security around Katie after fears that she would be tracked down by the man who subjected her to a brutal acid attack in 2008.

Stefan Sylvestre will soon be released from prison after the parole board approved his application, saying he had ‘displayed empathy for the victim and expressed remorse and shame’.

Strictly The Best airs this evening at 7.10pm on BBC1, ahead of the competition beginning next week.

Well we rather enjoy Katie’s social media pics actually! But what do you think?  Leave us a comment on our Facebook page @EntertainmentDailyFix and let us know!