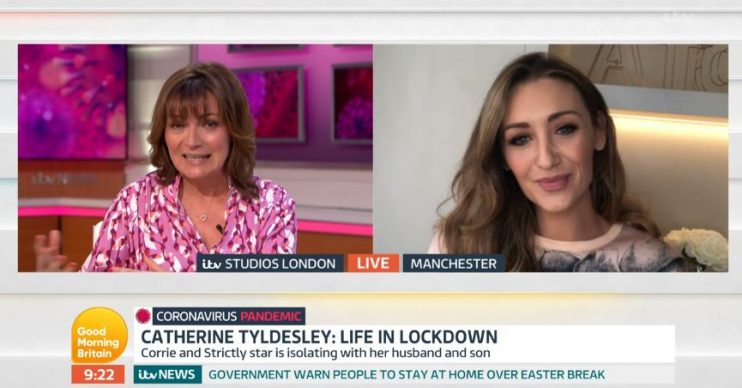 Strictly’s Catherine Tyldesley believes her husband had coronavirus MONTHS ago

"It's too much of a coincidence."

The former Coronation Street actress discussed how she was coping with the lockdown.

Catherine revealed she suspected her husband had coronavirus symptoms months ago.

The UK’s coronavirus lockdown is set to continue, as recent figures put the death toll at 7,978  – an increase of 881.

Catherine Tyldesley chatted to Lorraine Kelly on today’s show. She divulged her parents are currently suffering from COVID-19.

The actress shared how she was missing her parents but was lucky that they could recover at home.

Catherine said: “I’m dropping parcels on the drive way and driving off.”

The star believes her husband experienced the virus, at the end of last year.

Speaking on GMB, the Catherine detailed how on a trip to Dubai in November, someone collapsed on the plane.

“He collapsed several times and was receiving oxygen from the staff. They called for anyone with medical experience. We made it to Dubai and he was whisked away.”

Catherine went on to explain that her husband arrived in the country, with all the “symptoms of coronavirus”.

“Following morning, I woke up and Tom wasn’t there. He said ‘I can’t breathe you need to phone an ambulance.'”

“Tom is never poorly so for him to say that, I knew something was really wrong.”

“It’s too much of a coincidence.”

After detailing how Tom ended up in hospital twice during their holiday on Instagram, Catherine received messages from others on that flight saying they had the same experience.

Catherine is convinced that COVID-19 has been around “since September October”.

The Strictly favourite continued: “It’s too much of a coincidence.”

One GMB fan said: “Catherine I do believe you are right about coronavirus being around earlier than they say. I had it last year too!”

“I agree this coronavirus has been about a lot longer than we know, I was very ill for a month from Christmas Day had all the symptoms . Nearly choked to death when I coughed and so many people I know were also ill in December with same symptoms. It’s definitely been here since last year.”

“Thank you for bringing your story regarding your husbands infection with COVID-19 in November to the attention of the media.
Your theory that this virus being active since September/October 2019 is a breath of fresh air and backs up the first reported threats of a pandemic.”

You were amazing! Between me and you: I do actually believe that your husband had some form of Corona…
Stay healthy and thanks for Olga…

“Many people will be in Catherine’s position and wondering if they have had it in the family.”

The doctor elaborated: “Until we get antibody tests we are not going to know. The first cases in Wuhan were not described until early December. So if this was around before that, that would be something new.”

Dr Hilary finished by saying: “It is more likely this is some other infectious agent, because the coronavirus was not seen until December.”

Lorraine Kelly agreed: “We will have to wait until the end of this to get to the bottom of it.” 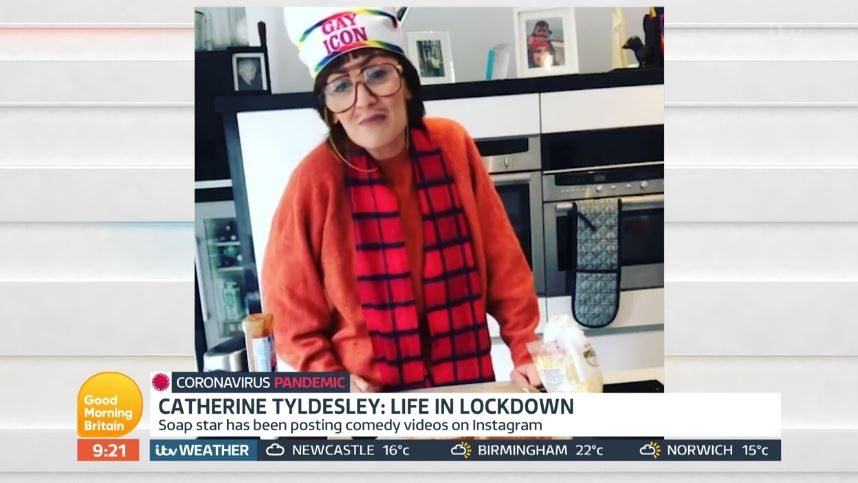 Catherine Tyldesley joked that this is what happens when you keep an actress indoors.

The star has created an alter ego to “entertain the nation”.

Dressing up as an unrecognisable character, she shares her “coronavirus tips.”

Lorraine found the look hilarious and said she thought it was Catherine’s “long lost cousin.”

Read more: Lorraine breaks down while talking to her daughter Rosie who’s in Singapore amid COVID-19 outbreak