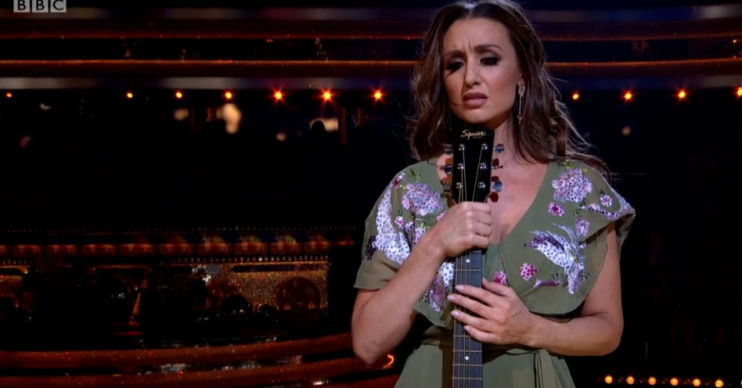 Strictly’s Catherine Tyldesley hails ‘most memorable night of her life’

Soap pal Antony Cotton was also on hand to cheer the former Corrie star, with judges Shirley Ballas and Motsi Mabuse among those moved to get to their feet and applaud Catherine and her pro partner Johannes Radebe.

Indeed, Catherine was so overwhelmed by the reaction she accidentally turned the air blue as she continued to receive plaudits when chatting to co-host Claudia Winkleman.

“I could see your eyes,” Claudia said reassuringly as Catherine looked to be close to sobbing due to the compliments she had received.

But that seemed to nearly push Catherine over the emotional edge as it sounded like she uttered a swear word on live TV before quickly covering her mouth.

However, that brief slip was not enough to put a dampener on her evening which she later hailed as a highlight of her life.

Posting a clip of her dance to Shallow from A Star Is Born to Instagram, the Eva Price actress also expressed huge gratitude to choreographer Johannes.

“I love you to tiny pieces,” Cath wrote in the caption.

She continued: “Thank you for one of the most memorable nights of my life.

“I adored your choreography for our #Rumba you clever man you!”

Fans agreed on the post that their performance was one to remember.

“You were amazing it made me so emotional,” commented one observer.

“You had me in tears. Beautiful,” remarked another person.

A third concluded: “Never seen a rumba as good as this.”

@johannesradebe I love you to tiny pieces. Thankyou for one of the most memorable nights of my life. I adored your choreography for our #Rumba you clever man you! @bbcstrictly ❤️❤️ #Strictly

– Strictly Come Dancing returns to BBC One tonight at 7.15pm