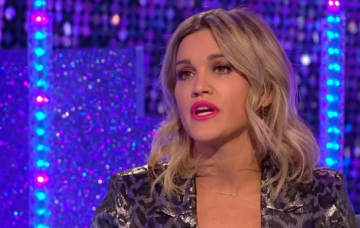 It was all a bit strained

Strictly Come Dancing’s Ashley Roberts has been scrutinised for having past dance experience, so she didn’t look pleased when she was asked if that is the reason she has been in the bottom two twice.

Ashley appeared on Strictly spin-off It Takes Two with her dance partner Pasha Kovalev on Tuesday, but when host Zoe Ball questioned whether her experience as a dancer was affecting her popularity the former Pussycat Doll seemed to avoid answering.

Zoe, 48, said: “Do you think perhaps your dance background has had that thing where people aren’t necessarily picking up the phone to vote? Do you think it might have affected it?”

Looking awkward, Ashley answered with: “I don’t know what people are picking up the phone to vote for. I hope it’s just on enjoying the performances.

“I’m just so grateful to be here and I’m going to come out Saturday and do the best I can. That’s all I can do really.”

The star found herself in the bottom two for the second time running at the weekend, with the judges opting to keep her in the competition on both occasions.

But a source recently claimed to The Sun that it has now knocked her confidence.

Read more: Bride causes outrage as she demands that her bridesmaid pay for the dress

The 37-year-old has expressed her gratitude at being given another chance and making it to the semi-finals of the show.

After surviving another week, she told her fans on Instagram: “I understand I have to keep proving myself, and upping my game each week. And being in the dance-off twice now is only helping me realise how much I want to be here. it’s been a dream to perform again!!!”

When I got asked to do Strictly, I remember my heart feeling like it was going to burst. I was so excited and soooo unbelievably grateful to have been given the opportunity to be a part of such an amazing show. This has been a very turbulent year for me, and so being a part of Strictly has been healing on many levels. I often find it hard to be vulnerable and share my highs and lows, as I’ve always learned how to keep going, chin up and stay on my game. Strictly has given me the opportunity to learn so many new things, to challenge myself constantly, to keep showing up again and again, and to be able to perform again is such a GIFT. And I understand I have to keep proving myself, and upping my game each week. And being in the dance-off twice now is only helping me realise how much I want to be here. it’s been a dream to perform again!!! The other contestants are incredible, and the standard of dancing is so very high!! I’m blessed with another week, so I’ll keep coming back and giving it my all for as long as I get to be here. To all of you have supported Pash and I, I can’t thank you enough!!! It means the most to me/us!!! Here’s to another week. Love you loads, Ash ♥️

Ashley and Pasha, 38, have received high scores throughout the competition, even getting the full 40 marks from the judges for their jive in Blackpool last month.

With only two weeks of the competition remaining, will Ashley be able to make it to the final?

Do you think Ashley is being given a hard time?  Leave us a comment on our Facebook page @EntertainmentDailyFix and let us know what you think!