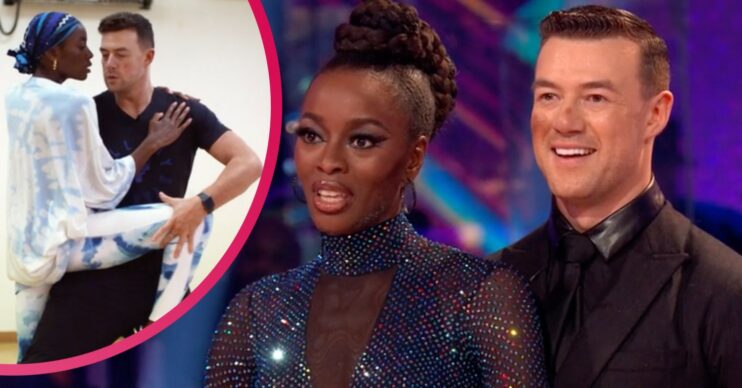 Followers reckon they have LOTS of chemistry

The Voice UK host AJ, 33, has electrifying chemistry with Kai, 26, on the dance floor. Some tabloid reports have even claimed the two are seeing each other away from the BBC One show, too.

The dance duo also enjoyed a sizzling moment on last Saturday’s (October 23) episode when they ‘nearly kissed’ as part of their Argentine Tango routine.

And the dating rumours are unlikely to go away after AJ’s most recent social media post showing them in a tight clinch.

She wrote: “We always have a cheeky little run through in the canteen just before going live on @bbcstrictly. Same time same place later alligator, 7:10pm on BBC ONE.”

However, AJ’s Instagram followers were more taken by the intimate dance move the pair were locked into.

Within an hour of being posted, thousands of AJ’s followers had registered their approval with a ‘Like’.

However, many comments – including from other Strictly stars – made mention of how ‘hot’ the pair’s pose was.

Host Tess Daly and Strictly pro Nadiya Bychkova were among those to post flame emojis in the comments section.

Other fans were equally as enthusiastic.

You have so much chemistry.

“You are amazing and an inspiration. The pair of you together are just fire!”

A second person joked: “Pretty sure there were moves in that Argentine Tango that hubby and I did when we conceived our son.”

And a third gushed: “You have so much chemistry. Love it.”

Meanwhile, someone else wrote: “AJ likes teasing us about her and Kai’s chemistry. It’s fun though.”

Neither AJ or Kai have indicated they are seeing one another.

Nonetheless, the Mail on Sunday quoted an unnamed insider as claiming last week: “They have this lovely romance going on, things have definitely changed in the last week or so and they are inseparable, not just as dance partners but away from that, too.

“It’s nice to see a Strictly romance where there is no curse, just two people who have fallen head over heels for each other.”

Strictly Come Dancing next airs tonight, Saturday October 30, on BBC One at 7.10pm.