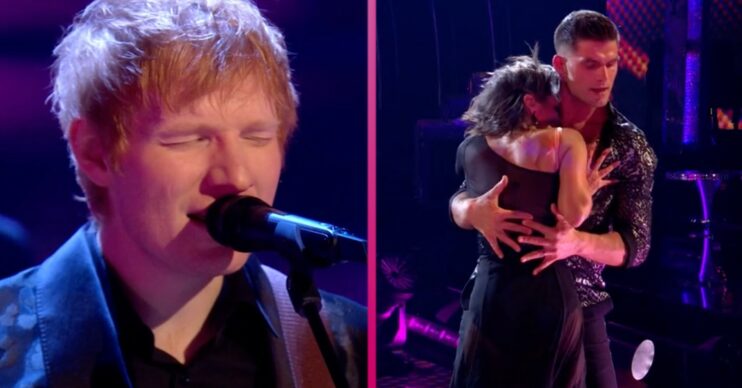 Fans joked the wife and husband couple should win the series

Strictly viewers were in raptures last night as Janette Manrara returned to the dance floor with husband Aljaz Skorjanec.

Janette, 38, has fronted spin off show It Takes Two during the 2021 series.

But the much-loved dancer was heartily welcomed back for a special performance in the final by fans on social media.

Strictly: Janette and Aljaz in the final

The wife and husband pairing made a special appearance during Ed Sheeran’s performance of Bad Habits.

They put in a steamy and passionate performance that delighted fans during the musical interlude.

And the moment was clearly significant for the couple, too, with Janette expressing her excitement ahead of the show.

Janette wrote on Instagram: “Dancing is how we met and fell in love. It‘s hard to express just how much our love is bounded by it.

“I have missed dancing with him more than I can explain; especially in such a beautiful ballroom like the one at @bbcstrictly.

“Tonight, for one night only, we are back in that beautiful ballroom dancing together.”

How did fans react to the final dance?

On Twitter, fans joked they were still calming down today after the sizzling showing yesterday evening (Saturday December 18).

One person tweeted on Sunday (December 19) morning: “Still calming down after Janette and Aljaz’s #Strictly dance.”

Can Aljaz and Janette win Strictly?

But at the time the show was airing, fans made it very clear they loved every moment of the dance between Janette and Aljaz.

“The best part of the #Strictly final today was the dance by Aljaz and Janette,” claimed one viewer.

“That dance to Ed Sheeran from Aljaz and Janette was pure fire,” tweeted another.

Thanks for stopping by the Ballroom with this absolute tune @edsheeran 🙌 pic.twitter.com/SHRXy1tV1p

Many others echoed this person’s tweet: “Can Aljaz and Janette win #Strictly?”

And a fifth person wrote: “Omg Aljaz and Janette burn that dance floor. They killed it. What a sexy couple. #Strictly #StrictlyComeDancing.”