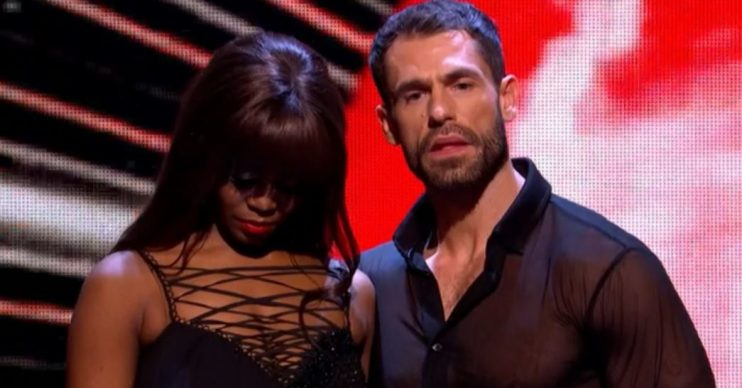 Some people have overly active imaginations!

Fans of Strictly Come Dancing are convinced that Kelvin Fletcher and Oti Mabuse are set to be struck by the show’s infamous curse.

As the pair awaited the results during Sunday night’s (13.10.19) elimination episode, eagle-eyed viewers noticed that the former Emmerdale actor appeared to be stroking the professional dancer’s hip.

The moment got fans on Twitter speculating about the dreaded Strictly curse.

One said: “Is it just me who noticed Kelvin stroking Oti’s hip with his finger? #strictlycurse! She is stunning! Hope he’s single x.”

Another tweeted: “Kelvin, I see that thumb. #Strictlycurse #Strictly.”

Someone else, writing after one of the pair’s earlier performances, put: “I think we know which couple is going to be struck by the strictly curse… Oti and Kelvin are [fire emojis] #StrictlyComeDancing.”

We don’t think Kelvin’s stunning wife liz, Marsland has anything to worry about… it’s obvious he’s besotted with her and their two children, Marnie and Milo.

During Sunday’s show, Radio 1 DJ Dev Griffin and his pro partner Dianne Buswell were knocked out of the competition.

The two of them were voted out after a dance-off against Viscountess Emma Weymouth and Aljaz Skorjanec.

A number of viewers rushed to Twitter to blast the result and former pro James Jordan lashed out at judges Craig Revel Horwood, Motsi Mabuse, Shirley Ballas and Bruno Tonioli, branding them “liars” for saying they were “shocked” that Dev was in the bottom two.

Dianne has taken the result particularly hard, according to her boyfriend Joe Sugg.

Read more: Strictly: Karen Hauer on her new man and being with someone who ‘doesn’t try to change’ her

The YouTuber, who found romance with the pro dancer after they were paired up during last year’s competition, appeared on Lorraine today (14.10.19) and said he didn’t think Dianne and Dev should have been given the boot.

Host Lorraine Kelly asked him: “Can we talk Strictly? What happened?”

Joe replied: “Good question, what did happen? I think like the rest of the country right now, it’s a massive shock. I’m gutted for Dev and Dianne, it’s just a real shock.”

Lorraine said, “It is. Is she okay?” to which Joe revealed, “No, not really. I really don’t think it should have been them to go. They had so much potential and he was brilliant and an amazing student. It just doesn’t seem… it’s weird.”