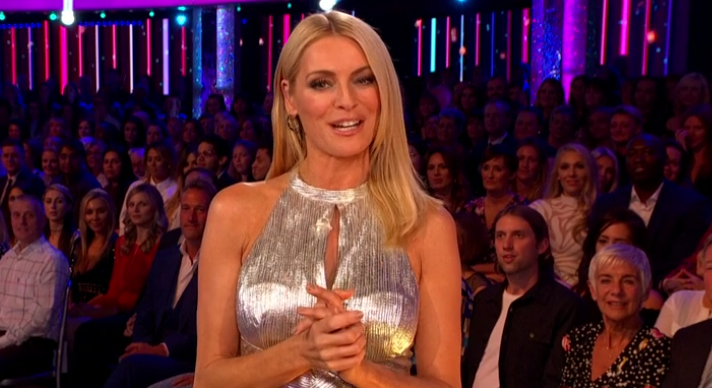 Eagle-eyed viewers spotted the host doing it more than once

On more than one occasion eagle-eyed viewers spotted Tess Daly doing something that definitely wasn’t scripted.

The judges had just given their feedback on Karen Hauer and partner Chris Ramsey when the camera panned out to show them walking up the stairs to join their fellow celebrities and pro dancers.

But as it did, Tess was seen dashing off to a different part of the studio.

“We’ve become distracted by Tess legging it after links now we’ve spotted it,” one Strictly fan tweeted after seeing the presenter sprint away.

While a second joked: “Why is Tess running like she’s finally happy the guests she invited over have left and she can go and have a cuppa and relax.”

Some fans said they’d actually seen her do it before, with a third tweeting: “She always does it. She fell on me once when I was in the audience.”

And: “Hahaha I was in the audience last week right next to where she runs and she is back and forth all the bloody time! She must be knackered!”

She then appeared to do it again after Aljaz Skorjanec and Viscountess Weymouth finished their dance.

Tess legging it in the background of #Strictly shots is now my everything. pic.twitter.com/ABqYzPASwn

The broadcast also suffered transmission issues earlier on, which Tess was forced to apologise for after AJ Pritchard and Saffron Barker’s opening dance.

Strictly viewers took to Twitter to complain about losing their picture as the contestants introduced the show.