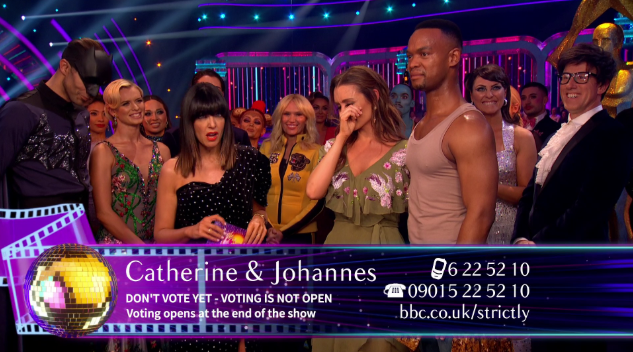 Shallow from A Star Is Born didn't go down well

Catherine Tyldesley performed a sensual Rumba with partner Johannes Radebe, themed around A Star Is Born, with the song Shallow, sung in last year’s remake by Lady Gaga and Bradley Cooper.

Read more: Bookies reveal fave to be eliminated this week

The judges and audience were wowed by their routine, with standing ovations from both in the studio.

The pair scored 32 for the number, impressive for that dance in week three of the contest, head judge Shirley pointed out.

Some called for backing tracks to be reintroduced, and the singers let go.

This singer is wrecking this song. Bloody hell #Strictly

Whoever that woman singer is , she needs a good Strepsil… #Strictly

They really need to get rid of this female singer #Strictly

Would be better if they had singers who could actually sing properly. #Strictly

me listening to these singers singing shallow #Strictly pic.twitter.com/1PZxru7XsV

I’ve been so excited for this that I’ve only just realised that we have to listen to the singers butcher the “sha-ha, sha-ha-ha-low” bits. #strictly

It’s just so much better without the singers #Strictly

Some fans of the show appreciate the live singing performances, though…

Finally a song the #Strictly singers can do a decent job of.
They are smashing it! 🤣 pic.twitter.com/FywgwicTyb