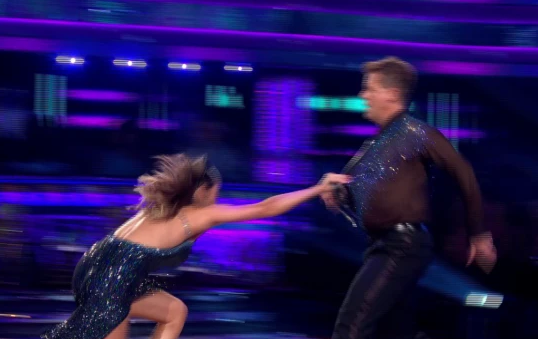 She hit the floor twice during Movie Week

It was an evening of surprises from Katya Jones and her celebrity partner Mike Bushell on Strictly Come Dancing.

The pro and the BBC Breakfast star performed the Cha Cha to It’s Raining Men from Magic Mike, with him sliding into the dance on a pole!

As if the pair weren’t already shaping up to be this year’s comedy act, Katya then fell over not once but twice.

She first took a tumble during her routine with Mike…

And then she went again as she and Mike went to speak to Claudia Winkleman.

Viewers were convinced the second slip was actually intentional though…

“That was a comedy trip the second time I’m sure of it!” wrote one.

Another suggested: “Am I the only one who Katya fell on on purpose the second time?!

A third posted her belief it was meant to be an obviously pretend fall, saying: “I think Katya’s fall when about to start Claudia’s interview was fake, I think that’s the whole point, a reference to her actual fall on the dance floor.”

Another posted: “After watching Katya falling over, it might be one of the funniest things I’ve ever seen.”

Some viewers joked about Katya’s estranged husband, Neil Jones, also a pro on the show, after she cheated on him last year by snogging her then-partner Seann Walsh.

One suggested he’d been polishing the floors and others remarked on how happy he looked after she’d finished the routine.

“Katya making the headlines for the wrong reason yet again.” said another viewer.

Others speculated that she’d been on the sauce…

More fans were just concerned that she was okay.

Well, everyone can calm down, as Katya has assured everyone she’s fine on Twitter.

She wrote on Twitter: “Guys! I’m totally fine! No idea what happened. So sorry. But so proud of Mike for carrying on and delivering the dolphin.

She also explained that the second fall was indeed on purpose…

And she addressed those tweeters who accused her of being drunk, making it absolutely clear she wasn’t!

“FYI I did it again on purpose in Claudia’s area! And im def not drunk as some people think.”

What do you think of tonight’s show? Leave us a comment on our Facebook page @EntertainmentDailyFix and let us know.