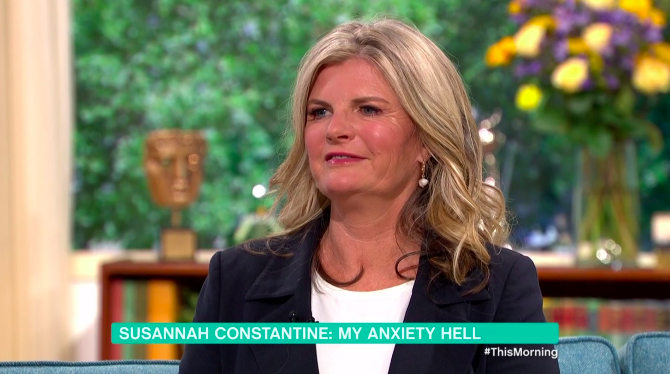 She opened up to Eamonn and Ruth on This Morning

Susannah Constantine has opened up about her crippling battle with anxiety, revealing her heartbreaking hopes that she would die.

The former Strictly star, 57, appeared on This Morning (July 31) and admitted to hosts Eamonn Holmes and Ruth Langsford that, in the past, she prayed for her car to be hit by a lorry.

Despite spending much of her career encouraging women to be more confident, the fashion journalist has now admitted she has been hiding a secret all this time.

For 30 years and more, Susannah has been battling crippling anxiety, which she says often stopped her from getting out of bed in the morning.

In a brutally honest interview on the TV morning show, the What Not To Wear star admitted the condition left her lonely and thinking: “Who am I to feel like this?”

Describing how she felt before appearing on the show, Susannah admitted: “I woke up this morning with that snowball in my stomach. It’s now starting to melt. Usually by 11am or 12pm, it’s gone and I’m okay.”

However, when she was a child, she “woke up scared every day”.

She explained: “I would wake up as a child every morning drenched in sweat and that came from, looking back now and that’s only something I’ve done very recently, my mother was manic-depressive and I guess I would wake up every morning scared of how she would be that day.

“There was that feeling of uncertainty. Was I going to be abandoned to her illness that day? So I think it stems from that.”

She continued: “I would pray that my car would be driven into by a lorry or something, so that I could put an end to it all.

“But it was just a thought that flashed through my mind… I say that. That is over-dramatic, but it was at that moment something [to] take the pain away and then it would go.”

Susannah, who was a TV double-act alongside Trinny Woodall in the early 2000s, went on to say that she kept her battle with anxiety a secret and tried to conquer it on her own.

She now looks at her anxiety as “a haunting”.

She continued: “I look at it as the ghost of anxiety has come to visit me and it’s going to pass. So intellectually I know it’s not going to stay with me… I use it as a motivator now.”

Susannah also admitted that taking part in Strictly “was, without question, the most frightening thing I’ve ever done” but was a “two fingers to anxiety”.

The TV presenter took part in last year’s series of Strictly, and was the first celebrity to be voted off the show.

Stacey Dooley went on to win the series, and take home the glitterball trophy.

A post shared by Susannah Constantine (@susannahconstantine) on Jul 1, 2019 at 2:15am PDT

Susannah is not the first TV star to open up about her anxiety recently, following Nadiya Hussain’s recent documentary Anxiety And Me on BBC1, and Corrie star Simon Gregson’s admission that he’s had therapy because of it.

This Morning is on weekdays at 10.30am on ITV