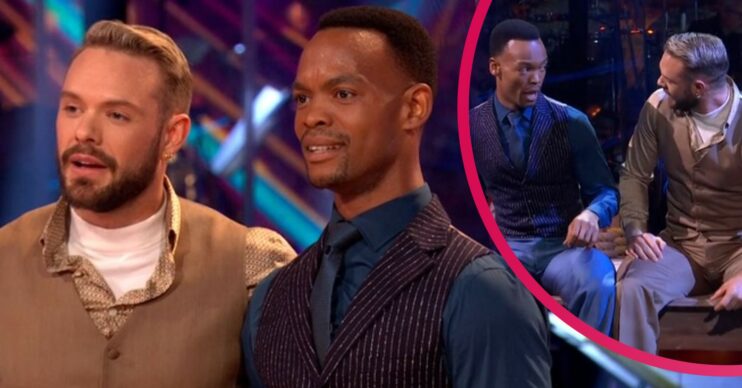 John Whaite has revealed the reason behind a comment he made during his Strictly Come Dancing performance.

Last Saturday (October 16), John and professional partner Johannes Radebe danced the American Smooth to I Knew You Were Waiting (For Me) by George Michael and Aretha Franklin.

Now, the Strictly social pages have revealed what the celebrities and their partners were really saying to each other during their live routines.

Their comments were caught on their mics as they took to the dance floor.

At one point during his performance, John said to Johannes: “Come on, follow me through the forest.”

Fans of the BBC One show were amused by the phrase and commented on it.

However, John later explained the reason behind his phrase.

On his Instagram Stories, John wrote: “‘Ooh John, chase me through the forest’ is what a bully at school used to say to me in a mockingly soft voice.

“So, I had to put that into our dance as a bit of extra fuel. Thanks man.”

Last weekend, John and Johannes bagged 29 points out of 40 for their American Smooth.

Head judge Shirley Ballas told them: “No mistakes. It was flawlessly delivered. I enjoyed the chemistry of the whole dance actually.

“Now it is time to get shifting, use that standing leg, a little bit more footwork here and there but overall consistently for you sir, well done.”

He added: “For me it was very, very odd. For some reason for me, the whole thing just didn’t come together. Sorry.”

I had to put that into our dance as a bit of extra fuel.

Speaking after the judges’ comments, John said: “I want to take on board everything everyone said and put that into practice.

“It’s a learning curve so I’m grateful for the comments and hopefully next week, if we’re here, we can do that.”

Did you agree with the judges? Leave us a comment on our Facebook page @EntertainmentDailyFix and let us know.