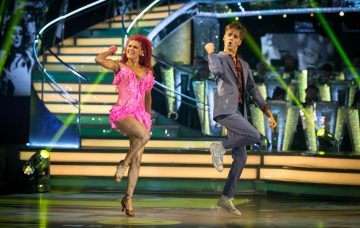 The YouTube sensation admitted being “sneaky” by including the victory dances in the BBC ballroom.

He was asked by The One Show host Angela Scanlon during Friday night’s show: “You’re determined to put sneaky little moves in there, aren’t you, from Fortnite?”

The 27-year-old replied: “Yes. It’s a very popular game at the moment. All the kids play it.

“It’s a video game, and I thought ‘I’ve got a large, young audience, let’s whack that in there’.”

And it’s clearly a hit with his eight-million YouTube subscribers, as he added: “So many people have picked up on it.”

His Strictly partner, Dianne Buswell, choreographs Joe’s routines to include the Fortnite moves.

She even gave the internet prankster a taste of his own medicine by creeping up behind him while he was eating his lunch during training and stroking his neck in a video shared to social media.

Clearly spooked, Joe turned around in shock before trying to save face by saying: “I’m fine. I’m just trying to finish my food.”

The vlogger was praised by the Strictly judges for his jive to Take On Me by A-ha in the first live week of the series.

They gave him 27 points, placing him third on the leaderboard.

This week he dances the Charleston to Cotton Eyed Joe, by Rednex.

What do you think of Joe on Strictly? Leave us a comment on our Facebook page @EntertainmentDailyFix and let us know what you think!