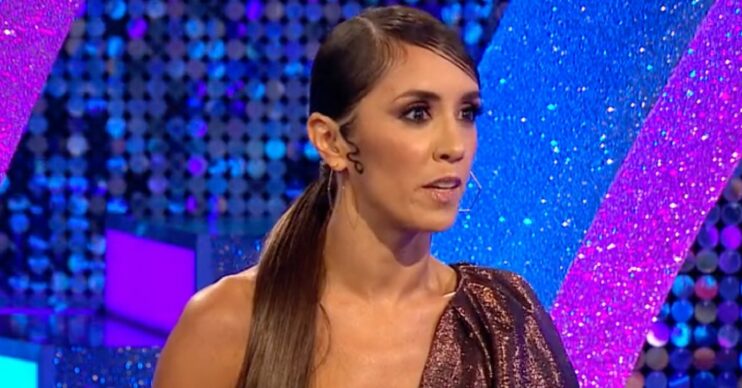 She currently hosts the show's spin-off alongside Rylan Clark-Neal

Strictly Come Dancing star Janette Manrara has hinted a possible return to the main show as a professional dancer.

The 37-year-old presenter is currently hosting the show’s spin-off series, It Takes Two, after taking over from Zoe Ball.

But it appears that Janette hasn’t ruled out a return to the Strictly dancefloor.

During the show, Janette sat down with Rhys Stephenson and his partner Nancy Xu.

The pro dancers began by comparing the methods they use to help teach their celebrity partners.

But maybe if I ever do it again…

Rhys explained that Nancy had employed a posturiser in order to perfect his frame.

They used it whilst training for the Viennese Waltz during the show’s first week.

However, Janette explained that she often uses a different tool to help with posture.

The host said: “I never use that you know, I always used the bands.”

She then went on to add: “But maybe if I ever do it again…”

Meanwhile, it comes days after Janette made her debut on It Takes Two.

The former pro is sharing hosting duties with Rylan Clark-Neal on the programme.

Making her first solo appearance this week, Janette started the show: “It’s my first show, thank you very much, on my own!

But while some loved Janette’s solo appearance, others took to Twitter to complain.

According to some viewers, the American dancer was particularly shouty.

One person complained: “Can someone tell Janette Manrara to stop SHOUTING!!!”

A second wrote: “@bbcstrictly #ItTakesTwo can tonight’s presenter please stop SHOUTING, she may be new my bloody ears are ringing.”

However, another tweeted: “Loving Janette as presenter, she’s a total natural.”

Janette has taken over from former host Zoe Ball, who quit the series after 10 years.