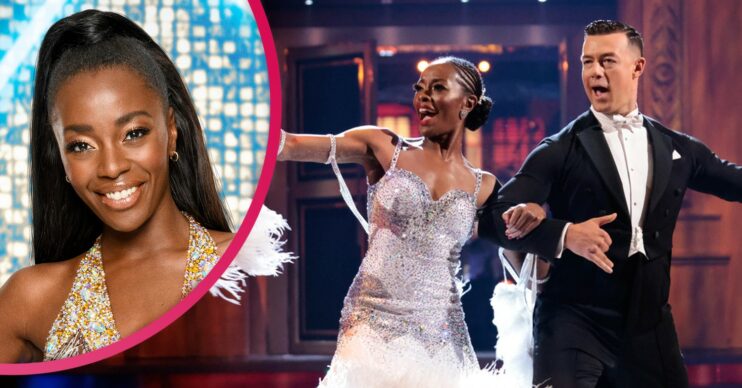 Strictly Come Dancing star AJ Odudu has “sustained an injury” that has left her on crutches.

Sources say that the reported injury has come at the worst possible time – the grand final is this weekend.

What happened to AJ Odudu on Strictly?

A source told The Mirror that the presenter, 33, was in “severe pain” and is on crutches in a bid to rest the injury.

“This is the worst possible timing but AJ is a real trooper and will keep going no matter what.

“The pain in her foot was terrible.”

She allegedly missed training on Monday (December 13) and had an “emergency scan”.

However, the source said they were “hopeful” that she would be ok for this weekend’s final.

AJ will compete in the final against Rose Ayling-Ellis and former Bake Off winner, John Whaite.

And she’s perfectly placed to make a serious challenge after her semi-final performance.

Her quickstep with partner Kai Widdrington got the judges drooling, and she scored a perfect 40.

Anton Du Beke gushed afterwards: “If ever there was a dance I wanted to be in, it’s that.”

Could AJ and Kai win?

And it’s not just the judges who think she’s got a chance to win.

Body language expert Darren Stanton told Betfair that he thinks the couple have a major advantage.

AJ has the potential to be the eventual winner: “The strength of [AJ and Kai’s] bond has reached new heights, with their near exit bringing them even closer together.

“The pair have built a very deep state of rapport between them.”